This essay appears in the current anarcha-feminisms issue of Perspectives on Anarchist Theory (N. 29), available here from AK Press!  Laura received an Institute for Anarchist Studies writing grant to complete this piece.

The violence enacted against Indigenous women and Two-Spirit/LGBTQ people evokes deep questions about the intent and impact of colonization in a Canadian settler and state context. The horrors of colonial violence—bodies were violated and abandoned at the sides of highways, in ditches, in rivers—tell stories of the vital importance of Indigenous women’s leadership, their warriorhood, their gifts and their medicines, and also of the centrality of gendered freedom and fluid belonging in Indigenous cultures. It is a system of colonization that seeks to erase and subsume these realities and to replace Indigenous truth with illusions of our weakness. We are at a pivotal moment now as state and settler voices seek to understand what is needed, and it is a pivotal moment best informed by threads of anarchist and feminist thought woven within Indigenous worldviews. Vital intersections are made between gender and Indigeneity because the conversation is always in danger of being rerouted by policing and state voices, as well as settler voices.1 The work that Indigenous women and Two-Spirit/LGBTQ people do on the ground—to renew our connections to culture, to renew the innovations and economies of our nations—needs more support in every way, from allies across intellectual lines.

This essay appears in the current issue of Perspectives on Anarchist Theory, N. 29, on the theme of anarcha-feminisms,  available here from AK Press!  Theresa is a past recipient of an Institute for Anarchist Studies writing grant.

To save our movements, we need to come to terms with the connections between gender violence, male privilege, and the strategies that informants…use to destabilize radical movements….Despite all that we say to the contrary, the fact is that radical social movements and organizations in the United States have refused to seriously address gender violence as a threat to the survival of our struggles.
– Courtney Desiree Morris, “Why Misogynists Make Great Informants: How Gender Violence on the Left Enables State Violence in Radical Movements”
How is it that revolutionary libertarian fervor can exist so harmoniously with machismo? It is far too easy in this instance to say that “it is hard to locate our tormentor. It’s so pervasive, so familiar. We have known it all our lives. It is our culture.” Because…the essences of liberty so illustriously espoused by these people have not extended their definition of freedom to their sisters.
– Ruby Flick, “Anarcha-Feminism”

The relationship between anarchism and feminism is a peculiar one. Though there has been exponential interest in anarchist movements, theory, and studies in the past twenty years, this increase has not necessarily lead to an expanse of writing or theorizing on the relationship between anarchism and feminism. While feminism has become a deep enough concern that most contemporary anarchist texts make mention of it in one way or another, there have been very few texts dedicated solely to this question. The most prominent among them is a new expanded edition of the formative collection, Quiet Rumours: An Anarcha-Feminist Reader.
Though many online articles and pamphlets from women and queer people, as well as myriad personal accounts and reports, insist that feminism is necessary in anarchist movements, the crushing reality of gendered violence in radical antiauthoritarian communities has yet to be adequately addressed.1 How might our approach to the relationship between anarchism and feminism be related to the continuing problem of gendered violence within radical communities? And how might we re-envision it in creative, productive ways?

I played a pivotal role in the early history of the Institute for Anarchist Studies (IAS). I conceived of it, drafted all the founding documents, selected the initial Board of Directors, led early fundraising campaigns, and anchored it as a whole. Although I have had little to do with the IAS since leaving it in 2005, my years with the organization were an important—and positive—experience for me. I appreciate that Perspectives editors asked me to share my reflections on the occasion of the group’s twentieth anniversary.
When we were first getting started, I often thought about the IAS’s future. I assumed that the years ahead would be riven by crisis but also contain opportunities for radical social change; the challenge was to create an organization that could navigate those fissures while pushing toward substantive revolutionary alternatives. Although it should have been obvious to me, I never realized that one day I would wrestle with the IAS’s past. However, after two decades, those of us linked to the project now have the obligation to make sense of its history.

This is the introduction to the anarcha-feminisms issue of Perspectives on Anarchist Theory (N.29). It is available from AK Press here!
Ok, editorial collective. Let’s talk this through. So, what are anarcha-feminisms and why do they need their own Perspectives issue?
Well, because these questions persist: what’s the relationship between anarchism and feminism? What critiques do feminists have of anarchists, and vice versa? Are anarchist spaces also feminist spaces, and if not, why not? Isn’t feminism supposed to be implicit within the meaning of anarchism, and therefore unnecessary to specify? 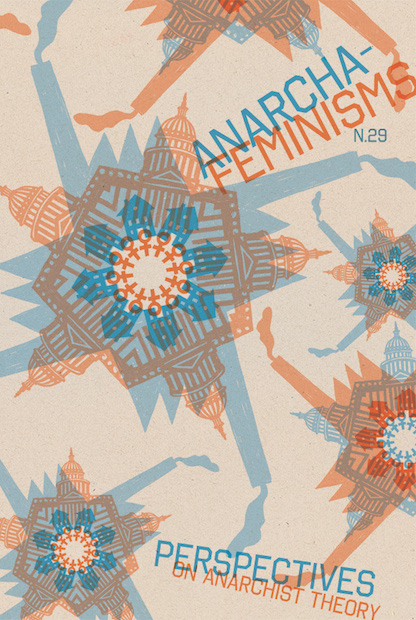 Supposed to be, yes. Maybe. Depends. Anarchist organizing and socializing environments are NOT always feminist (eyeroll if you agree–we thought so). The need to confront one another on the persistent failure of practices to live up to proclaimed ideals, suggesting that anarchist cultures haven’t always been able to sufficiently break free of the patterns of the society they’re trying to oppose and replace, is in itself enough of a reason for stating it explicitly.
But it may be even more than that. A certain ideal of anarchism may be feminist, and a certain ideal of feminism may be anarchist, but not all the polymorphous forms of anarchism or feminism fit that description, even at the level of principles and ideals. Just as there can be feminisms whose aim might be, for example, to insert women into state and corporate power structures, or traditional religious leadership, there can be anarchisms which promote individualist machismo in the name of autonomy, or which essentialize gender binaries in the name of “nature.”

It’s our birthday!  Want to give us a present?
If you have any of these things lying around,
here are some things we could use:

We always appreciate your monetary donations. We are now a 501c3 so your donations are tax deductible. Make a monthly or one-time donation here.
Thank you!
And if you’re in the Portland, OR area on September 9, please come celebrate with us! Info about our exciting anniversary party is here.