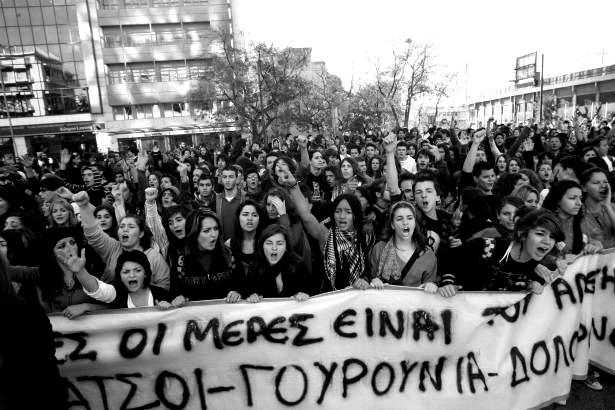 Preface
This essay examines one of the most important historical events of the past decade, the 2008 Greek rebellion and its possible relationship with the rise of the Coalition of Radical Left (SYRIZA) to power. My aim is to eludicate this revolutionary moment without exhausting my focus on urban violence, which I consider a second priority. I will elaborate on the anarchist elements of the revolt and the influences in the general attitude of the public. Certainly (and to avoid crucial misunderstandings) the December revolt would be unimaginable without having incarnated some of the most fundamental anarchist elements that are widely embraced by a large part of the Greek youth (and most of all we cannot ignore Exarcheia – district of central Athens – where the revolt begun, an area of particular symbolism, which for years was the main epicenter of the Greek anti-capitalist movements). However, it is certainly wrong to classify it as a purely anarchist event as it is believed by many activists across the world. This very common false assumption has led to a peculiar but also unacceptable mystification for the Greek anarchist space. Contrary to that, the vast majority of young Greek anarchists seem to be reluctant to abort sectarianism and idolatrous invocation to ideological puritanism, which isolates them from the public sphere. Thus, instead of allowing their presence to become a significant protagonist in the country’s antagonistic movement, to propose radical alternatives beyond liberalism and parliamentarism, their absence from the procedures that shape a new political consensus results for all populist initiatives to become entirely consumed by the rhetoric of party mechanisms. This, precisely, explains the rise of the SYRIZA, which although has not much to do with horizontalism and direct democracy, should not be discarded since its victory in the recent elections of January, 2015 is of utmost important (I will discuss this issue in relation to the December revolt). 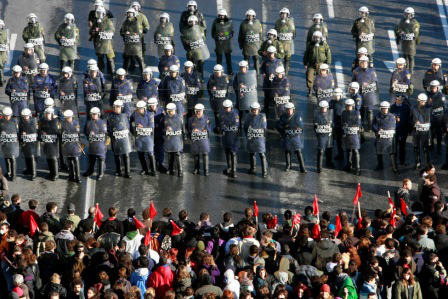 This particular era sees two milestones of urban antiauthoritarian unrest with the Communists, the non-Stalinist populist Left and the anarchists ‘leading’ the struggle: in 1985 the assassination of fifteen-year-old Mixalis Kaltezas led to widespread clashes between protesters and riot police, whilst in 1991, following the murder of Nikos Temponeras “a teacher who had, together with his students, defended his school’s occupation from the right-wing vigilantes who were trying to break it” (Giovanopoulos & Dalakoglou 2011, 103), three days of generalized conflict between students and the repression forces of the state took place in Athens and other major cities. In addition, during 1970, 1980, 1987, 1988, 1990 and 1991 we see organized student protests against neoliberal school reforms whilst in 2006-07 in view of 3rd level educational reforms proposed by the conservative government of New Democracy, over 300 university faculties across the country were shut down, but protesters that took to the streets faced hard police repression. However, all these crucial populist moments are nothing but the legitimate offspring of the Polytechnic uprising resistance, where once again spontaneous political action proposed rupture with an unpopular regime. As Oikonomou stresses (2013, 30), the most notable characteristic of the days of the Polytechnic uprising is the direct involvement of citizens in the pursuit of freedom. In short, what we have here is the revival of friendship, public appearance and direct involvement in the decision-making since the beginning of Metaxas’ fascist dictatorship, precisely thanks to the anarchist involvement in the anti-dictatorial initiatives. Indeed, the occupation of the Polytechnic School by a handful of students was not controlled or guided by any party, bureaucracy or representative says Oikonomou (2013, 31). The Polytechnic uprising utilized the best substance of human beings as political animals: solidarity, selflessness, imagination and passion for creation (Oikonomou 2013, 30) – in other words friendship – (elements that we initially identify during the apogee of the Greek labor movement in Thessaloniki). Openness, self-organization and self-management – the root causes for the spark of the anti-dictatorial Student Movement according to Oikonomou (2013, 31) – carry on during the era of Metapolitefsi, and re-appear largely in the days of December where Greece sees her biggest unrest since the restoration of parliamentarism (1974).
This is the historical and political significance of the rebellion (the reappearance of fully emancipatory projects and initiatives) that became entirely ignored by the major mainstream analysts whose response was a sterile condemnation of violence, describing the event as a generalized outbreak of juvenile delinquency or the rule of the howling mob against ‘common sense’. Both in the post-WWI labor movement struggles and during the Polytechnic uprising in Athens, self-organization, togetherness and friendship replaced terror, state propaganda and mistrust. But similarly during the December revolt we could see neighborhood assemblies along with the occupations of schools, universities, municipal offices and theaters taking place (Metropolitan Sirens 2011, 146; Andreas Kalyvas 2010, 354), and a widespread rejection of apathy, cynicism, the tyranny of financial uncertainty and political indifference. As I have already mentioned, such open public assemblies, (namely political bodies operating horizontally and allowing key decisions to be taken through procedures of direct democracy), spontaneously appeared “in every genuine revolution throughout the nineteenth and twentieth centuries” (Arendt 1990, 249), and triggered or invigorated social movements that resulted to the expansion of civil rights and liberties. This profoundly denotes the importance of elucidating on the Dekemvriana, as one of the most crucial democratic populist movements in modern European history. On its emancipatory substance, therefore, (which, as I explained, is a subject to a genealogical process) I will further (and more extensively) elucidate in the next chapter. 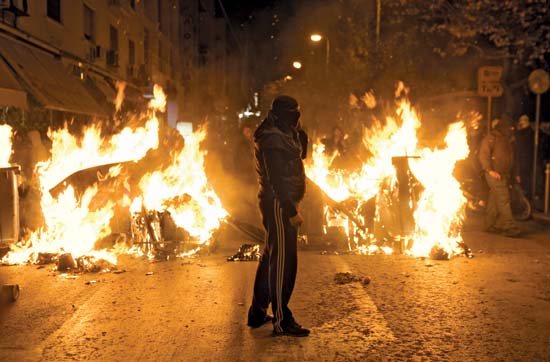 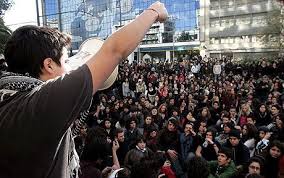 2 thoughts on “The Greek December Revolt and its Current Relevance, by Michail Theodosiadis”