Perspectives on Anarchist Theory, which has been published for over seventeen years by the Institute for Anarchist Studies, is proud to present an evening in Portland, Oregon with noted scholars and activists Walidah Imarisha, Tamara Lynne, and Lara Messersmith-Glavin. The theme of the evening is ‘strategy’ and will be held at People’s Coop (3029 SE 21st Ave) in the community room on Tuesday, August 19th from 6 – 8 pm. The event is to launch issue No. 27 of Perspectives on the theme of strategy.

The evenings featured speakers are:

Walidah Imarisha, speaking on “Sci Fi and Strategy.” Walidah will discuss the ways that visionary science fiction helps us dream up new worlds and create the strategies to bring them into existence. Walidah is the co-editor of the forthcoming Ocatvia’s Brood: Science Fiction Stories From Social Justice Movements (2015) and is one half of the poetry duo Good Sista/Bad Sista in addition to her organizing work.

Tamara Lynne,speaking on “Theatre of the Oppressed: Strategies of Transgression,” for which she reflects on her time in India, her work with Theatre of the Oppressed organizers there and lessons for organizing work here at home. Tamara will draw from her essay “Theatre and the Art of Transgression: Unlearning the Rules of Engagement” featured in the current issue of Perspectives.

Lara Messersmith-Glavin will introduce the work of the Institute for Anarchist Studies, and the journal Perspectives on Anarchist Theory and will host the event. Lara is a co-editor of the recent book Life During Wartime: Resisting Counterinsurgency (AK Press: 2013), is an IAS board member and Perspectives editorial collective member.  Lara wrote the introduction for the current issue.

The last few issues of Perspectives will be available, including the new Strategy issue, the Care issue, the Movements issue, and the Politics of Climate Change issue.  Also available will be several of the books in the Anarchist Interventions book series co-published with AK Press, including Maia Ramnath’s Decolonizing Anarchism, Harsha Walia’s Undoing Border Imperialism, and Javier Castro’s Imperiled Life:  Revolution Against Climate Catastrophe. 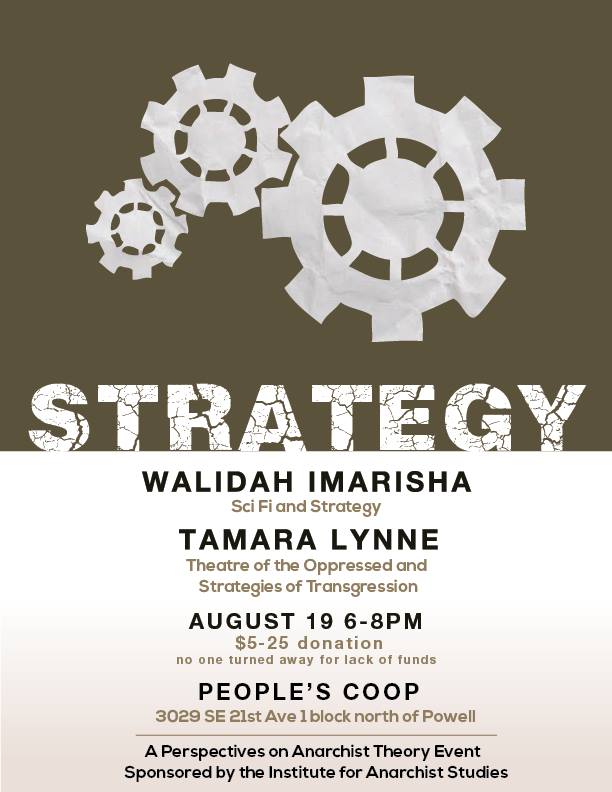 $5 to 25 sliding scale donation, no one turned away for lack of funds.