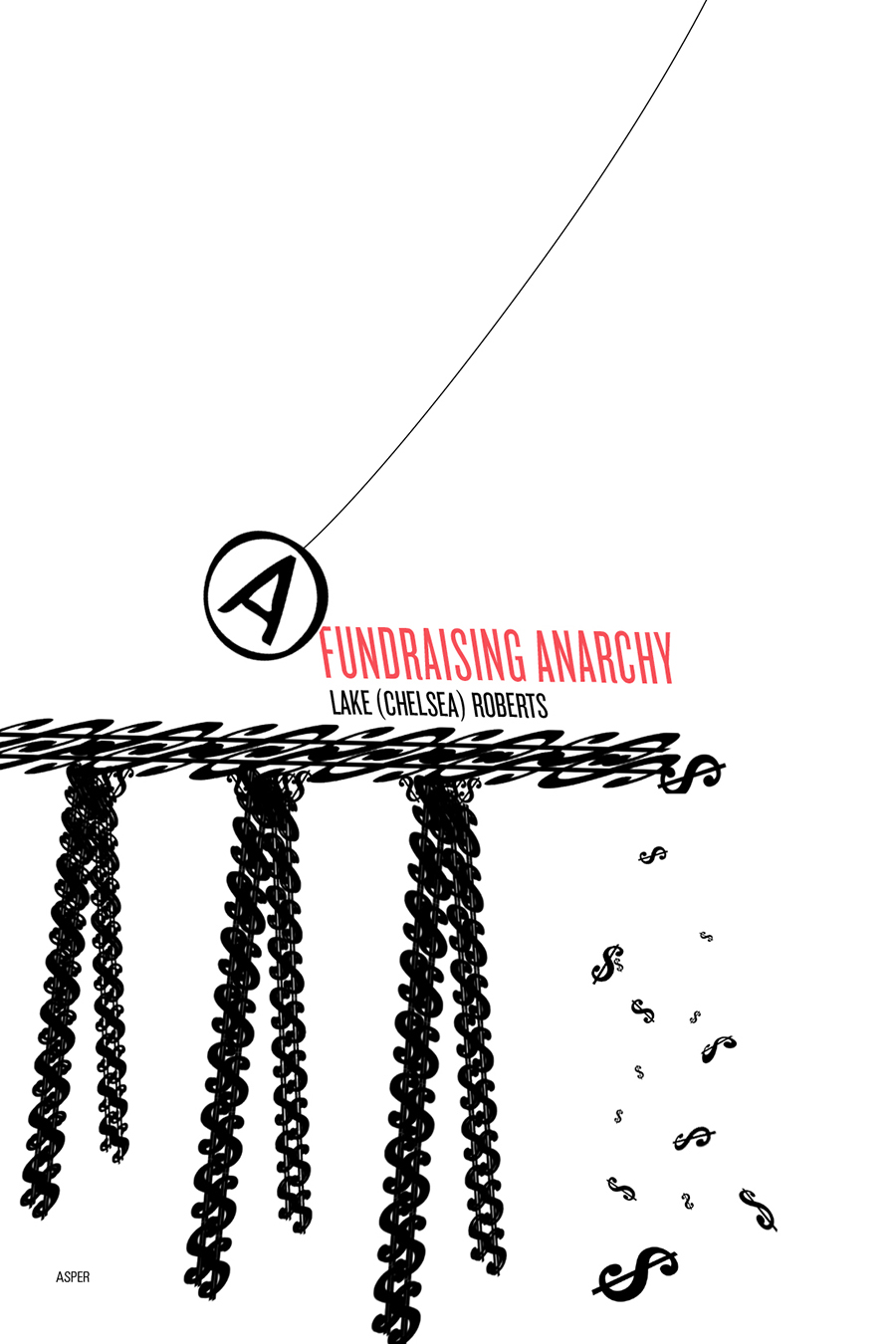 “Put in very blunt terms, they had taken power – not by simply changing the names of existing oppressive institutions but by literally destroying those old institutions and creating radically new ones… Social revolutionaries, far from removing the problem of power from their field of vision, must address the problem of how to give power  a concrete and emancipatory institutional form.”

-Murray Bookchin, “Anarchism and Power in the Spanish  Revolution,” The Next Revolution: Popular Assemblies  & the Promise of Direct Democracy  (Verso Press, 2015)

I am an anarchist who works at a non-profit public radio station. Yes, that public radio. A space that welcomes those among us who imagine a better world. If you’ve ever wondered where “Support for NPR” comes from, it’s me. I’m a fundraiser. And of the many questions posed by the “Power Issue” of Perspectives, the one I return to almost daily is, “Is what we’re doing working?” Unfortunately, for non-profit fundraisers, it’s not.

It is no secret that the non-profit sector is mired in the same growth ideology that feeds capitalism. No matter what kind of non-profit fundraising work you do, you are likely familiar with our gleaming annual reports displaying infographics that prove the success of new initiatives, or you’ve no doubt attended “relationship-building” dinners that result in renamed programs honoring your biggest donors (or better, a responsible corporation). You understand how it feels to actually beam with pride at our organizations as they grow- grow- GROW. We mostly like our bosses. As fundraisers, we are people with visions, and needs like rent, so we can’t help but throw ourselves into our work.

But after work, in a quiet moment, we hear what taps at the back of our brains and the center of our hearts. Something is wrong. As Bookchin states, liberating society is not accomplished only by building the good, but by literally destroying institutions of power to make way for radically new ones.

The people I know, I work with, and I really like, are highly skilled at building up and really bad at tearing down. Myself included. It’s hard to admit that something isn’t working, let alone attempt to dismantle a faulty system. But the non-profit industry’s ideological assumption, our over-emphasis on growth, success, and positivity, is resulting in workplaces where we’re unwilling to throw anything away, and then we wonder why nothing sparks joy.

I have anarchist politics, which I broadly define as removing domination from society and interpersonal relationships to create an egalitarian, sharing society. The theories I subscribe to posit that domination can be removed on a two-fold path (or with a one-two punch if you prefer) of consciousness-raising and direct action.

I was pretty miserable at the start of my first fundraising job, and that isn’t rare. Turnover rates are high in our line of work. If you are just getting started, rest assured that “making it rain” in this industry doesn’t mean throwing cash, it’s more like kneeling under the sky and praying. I stayed for the mission and the healthcare and the ability to set my own schedule. A year in, I got a few donors and started learning new things. It turns out rich people can be nice, and I hadn’t known that. I had never been to lunch with a CEO or a person with wealth. My donors were funny and kind, and some really believed they were doing everything they could to help.

I thought I had cracked a code, “Could it be that rich people just don’t know?” And if they knew, I mean if they knew, wouldn’t they voluntarily redistribute even more of their wealth? What is stopping them from becoming my neighbor in this two-bedroom apartment complex next to the freeway? I have access now, I thought. I can change their minds. I can participate in consciousness-raising.

I began to dream of some kind of organization funded by the rich that lobbies for tax reforms to redistribute their own wealth. I thought I might be able to do that now with my increased access to people with capital. I know what you’re thinking, no one with wealth would ever donate to something like that, but people make decisions against their own self-interest all the time. We sacrifice to live in community, albeit some more than others. I thought, seriously, there must be a few billionaires that would contribute to the “Bill to Tax Billionaires!” There are already conferences dedicated to providing a safe space for young people with wealth to investigate (and perhaps accept) their roles as “Changemakers.”1 I can’t imagine the pun is not intended.

I thought, why can’t there be anyone in the one percent who wants to truly topple the system? And how can I find them? As fundraisers we’re always asking ourselves, “Who gets it? Who believes in my cause?” We are wrong when we think that simply finding more people who believe in education, ending hunger, journalism, and curing cancer, is the answer to our funding problem. Maybe we should be asking, “Who doesn’t get it?”

In my first-year-fundraising schemes, the illness that is hoarding massive amounts of wealth stems from miscommunication, as though the data just hasn’t been presented in the right way. For example, studies showing that happiness does not increase past an individual yearly income of $95,000 (adjusted and estimated for cost of living) prove there is no personal, measurable, emotional benefit to staying rich.2 If billionaires only knew, I thought. That’s it, they must not know!3

But the thing is that they do know, ya know? I used to think like this because I am a person with anarchist politics: a person who chooses happiness, who wants to be filled with joy and help create that with other people. Influenced by my first-time access to people with extra capital, I dreamt that I could convince individuals to give away wealth in a series of decisions framed around their own happiness, which just happened to benefit the survival of the planet, and the dignity of humanity, because I was learning about philanthropy, and isn’t that what it’s all about?

Unfortunately, no. Philanthropy is not about happiness. This is not the “Happiness” issue of Perspectives. Money will always be about power, even when we have enough. And yet serious discussions in our organizations about how we hold the line for the rich are dismissed, or worse, we tell ourselves it’s an off-topic and irrelevant item for this meeting.

Our organizations operate like the private sector’s funhouse mirror. While we are staffed with social-justice personalities and passion, we are entrenched in the second punch of social change, a constant rebuild. We work to create the radically new on top of dysfunctional systems that no one is willing to obliterate. And apart from the programs we deliver, which can be liberatory (I care about journalism,) the way most of us are funding our programs does not contribute to the better world we know is possible. This is the non-profit industrial complex, in 2021.

But First, It Gets Worse!

In Anand Giriharadas’ book, Winners Take All: The Elite Charade of Changing the World (Knopf, 2018) he criticizes non-profit-seeming “think tanks” led by “thought leaders,” which prize “innovation” (my actual trigger word) and enlightened corporate self-interest as the solution to the problems facing our planet.

Giriharadas states, “All around us, the winners in our highly inequitable status quo declare themselves partisans of change. … They may join or support movements initiated by ordinary people looking to fix aspects of the society. … More often, though, these elites start initiatives of their own…these initiatives mostly aren’t democratic, nor do they reflect collective problem-solving or universal solutions.”4

For example, last year, Salesforce CEO Marc Benioff spent $30 million funding a research institute associated with the University of California at San Francisco which promises to “research causes of homelessness.”5 As Julianne Tveten argues, the many causes of homeless are known. Regardless of research, what she calls “capitalist charity” will not solve them. Also last year, Jeff Bezos built a homeless shelter in an Amazon office building in Seattle. Cool. Regardless of the PR blowout and ribbon-cutting, these “helping” initiatives do not actually solve problems: they showcase power, using misdirection with help from some press to balance growing complaints about the way Salesforce and Amazon’s business practices displace people from San Francisco and Seattle, respectively.6

These corporations find no irony in funding causes adjacent to the problems that their very existence exacerbates. They are not afraid of blame, critique, or retaliation in the form of regulation. And why should they be? As long as they work towards “solutions” that do not compromise their own wealth, championing what is good while ignoring dissent, they’re doing what is expected of them.

In contrast, the San Francisco poor-person led coalition POOR Magazine has maintained a strong critique of capitalist philanthropy for years, defined as solutions administered with the express consent and direction of the wealthy.

From their website, “Philanthropy which has its roots in the Slave/Master ‘plantation’ model, operates from the premise that people with money and/or resources inherently hold more knowledge about money than people without money. Contrary, we believe that people who have struggled to survive, feed and clothe multiple family members and themselves in fact hold a deep scholarship about the use and distribution of resources.”7

They operate on a yearly budget between $300,000- $600,000. They have only recently begun to receive some grant assistance and they have started a project called, “homefulness,” a poor person-led solution to the gentrification crisis plaguing San Francisco. Imagine what they could do with $30 million.

As non-profit workers, although we are not always representative of the communities we serve, we don’t have to operate like solution-designers either. We can research the poor-person led, Black and Indigenous People of Color (BIPOC)-led, youth-led movements and organizations that inspire us. We cannot let our visions be co-opted by large corporations that cover their most embarrassing problems with cash.

Consensus-based small programs that change lives are currently operating in the squatted basements of buildings, rented by despotic economic philosopher kings – who pay out five percent of corporate foundation earnings in absence of tax to the cities they operate in. This kind of corporate “giving” will never challenge capitalism, but it will crowd out non-profit programs. How many people know about POOR Magazine? How many people know about Salesforce?

When The Revolution Will Not Be Funded

Foundations exist to fund non-profits, provided there is a good fit. Foundation funding priorities are not surprising: education, homelessness, medicine, the environment. A private, corporate, or family foundation typically chooses cause areas and geographic locations, then distributes funds annually through grant competitions.

Foundations fall short of the “Bookchin test,” (which I’m making up right now), because of the way they reward reformist, as opposed to revolutionary action. Foundations have a reputation for not funding the first punch. They want their money to have a good impact, they want pictures, usually, charts and graphs, and other metrics of success. Many foundations prefer to fund programs that can “demonstrate measurable impact.” It’s difficult to get grants for things like journalism, for example. How do you demonstrate the measurable impact of truth-telling? Of an informed public?

In my experience, foundations prefer to fund school lunches and send corporate t-shirts for kids to wear at summer camps. They may say that their funding impacts social change, but what direction are we heading in? Is the current funding system working to address social concerns like poverty, homelessness, lack of access to education, food, medical