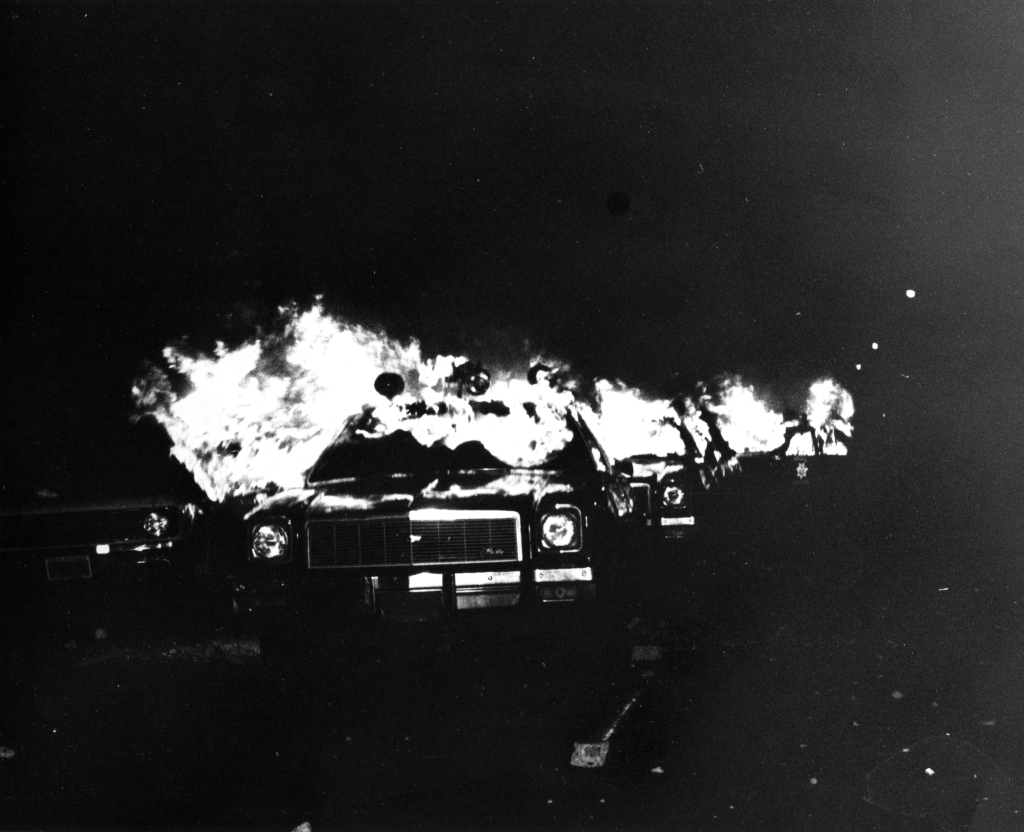 Forty years later, on a similarly muggy June night in 2009, history repeated itself. At the Rainbow Lounge, a newly opened gay bar in Fort Worth, Texas, the police staged a raid, verbally harassing patrons, calling them “faggots” and beating a number of customers. One patron was slammed against the floor, sending him to the hospital with brain injuries, while seven others were arrested. These instances of brutal force and the administrative surveillance that trans and queer folks face today are not significantly less prevalent nor less traumatic than those experienced by the Stonewall rioters of 1969, however the ways this violence is currently understood is quite different. While community vigils and public forums were held in the wake of the Rainbow Lounge raid, the immediate response was not to fight back, nor has there been much attempt to understand the raid in the broader context of the systematic violence trans and queer people face under the relentless force of the prison industrial complex (PIC). 2 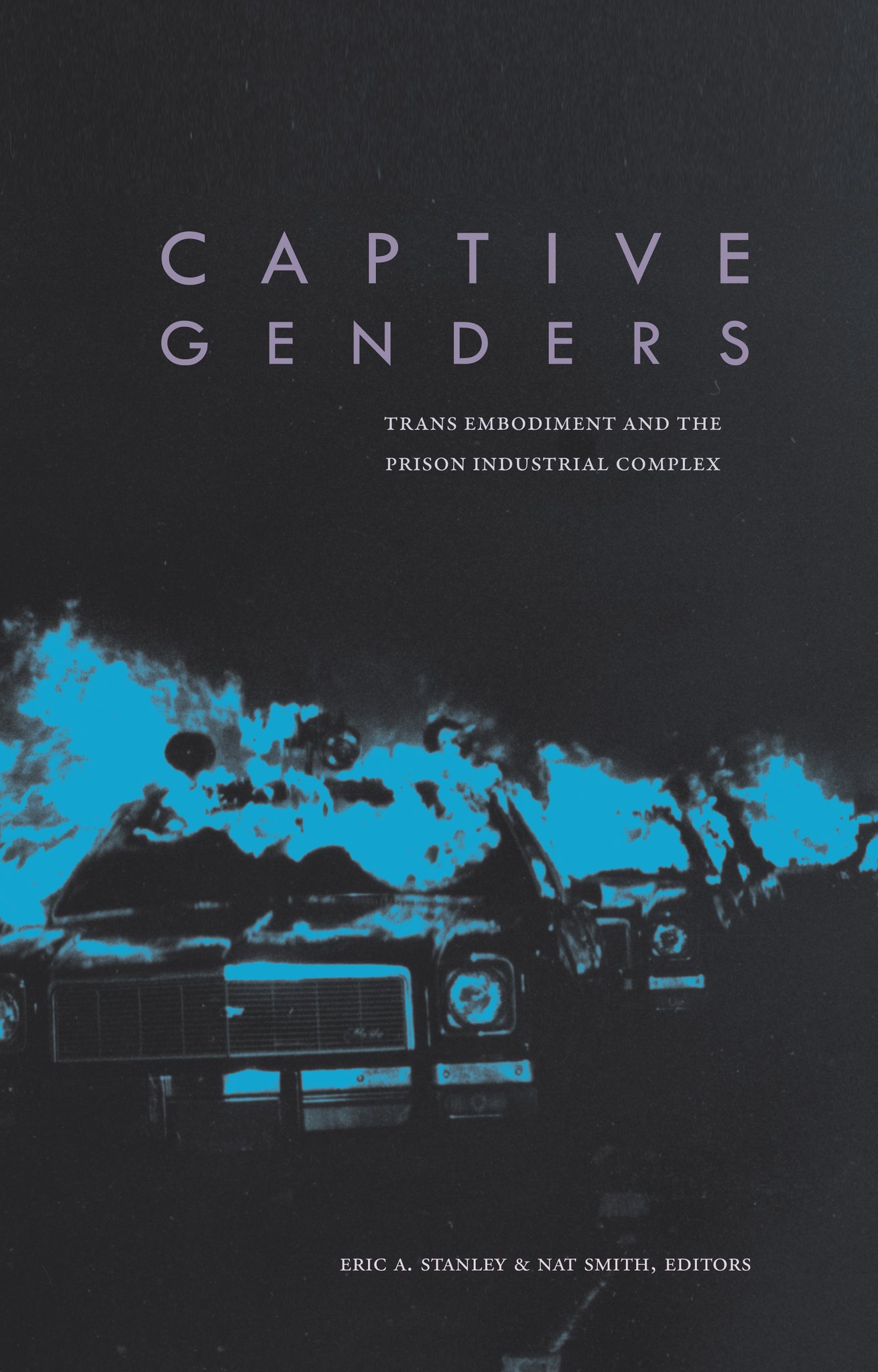 Captive Genders is in part an attempt to think about the historical and political ideologies that continually naturalize the abusive force of the police with such power as to make them appear ordinary. This is not to argue that the types of resistance present at the Stonewall riots were commonplace during that time, nor to suggest that trans and queer folks do not fight back today; nonetheless one of our aims is to chart the multiple ways that trans and queer folks are subjugated by the police, along with the multiple ways that we have and that we continue to resist in the face of these overwhelming structures.3
I start with the Stonewall riot not because it was the first, most important, or last instance of radical refusal of the police state. Indeed, the riots at San Francisco’s Compton’s Cafeteria in 1966 and at Los Angeles’s Cooper’s Doughnuts in 1959 remind us that the history of resistance is as long as the history of oppression. However, what is unique about the Stonewall uprising is that, within the United States context, it is made to symbolize the “birth of the gay rights movement.” Furthermore, dominant lesbian, gay, bisexual, and transgender (LGBT) political organizations like the Human Rights Campaign (HRC) and the National Gay and Lesbian Task Force (NGLTF) attempt to build an arc of progress starting with the oppression of the Stonewall moment and ending in the current time of “equality” evidenced by campaigns for gay marriage, hate crimes legislation, and gays in the military. Captive Genders works to undo this narrative of progress, assimilation, and police cooperation by building an analysis that highlights the historical and contemporary antagonisms between trans/queer folks and the police state.4
This collection argues that prison abolition must be one of the centers of trans and queer liberation struggles. Starting with abolition we open questions often disappeared by both mainstream LGBT and anti- prison movements. Among these many silences are the radical trans/queer arguments against the proliferation of hate crimes enhancements. Main- stream LGBT organizations, in collaboration with the state, have been working hard to make us believe that hate crimes enhancements are a necessary and useful way to make trans and queer people safer. Hate crimes enhancements are used to add time to a person’s sentence if the offense is deemed to target a group of people. However, hate crimes enhancements ignore the roots of harm, do not act as deterrents, and reproduce the force of the PIC, which produces more, not less harm. Not surprisingly, in October 2009, when President Obama signed the Matthew Shepard and James Byrd, Jr. Hate Crimes Prevention Act into law, extending existing hate crimes enhancements to include “gender and sexuality,” there was no mention by the LGBT mainstream of the historical and contemporary ways that the legal system itself works to deaden trans and queer lives. As antidote, this collection works to understand how gender, sexuality, race, ability, class, nationality, and other markers of difference are constricted, often to the point of liquidation, in the name of a normative carceral state.
Among the most volatile points of contact between state violence and one’s body is the domain of gender. An understanding of these connections has produced much important activism and research that explores how non-trans women are uniquely harmed through disproportionate prison sentences, sexual assault while in custody, and nonexistent medical care, coupled with other forms of violence. This work was and continues to be a necessary intervention in the ways that prison studies and activism have historically imagined the prisoner as always male and have until recently rarely attended to the ways that gendered difference produces carceral differences. Similarly, queer studies and political organizing, along with the growing body of work that might be called trans studies—while attending to the work of gender, sexuality, and more recently to race and nationality—has (with important exceptions) had little to say about the force of imprisonment or about trans/queer prisoners. Productively, we see this as both an absence and an opening for those of us working in trans/queer studies to attend—in a way that centers the experiences of those most directly impacted—to the ways that the prison must emerge as one of the major sites of trans/queer scholarship and political organizing.5
In moments of frustration, excitement, isolation, and solidarity, Captive Genders grew out of this friction as a rogue text, a necessarily unstable collection of voices, stories, analysis, and plans for action. What these pieces all have in common is that they suggest that gender, ability, and sexuality as written through race, class, and nationality must figure into any and all accounts of incarceration, even when they seem to be nonexistent. Indeed, the oftentimes ghosted ways that gender and heteronormativity function most forcefully are in their presumed absence. In collaboration and sometimes in contestation, this project offers vital ways of understanding not only the specific experience of trans and queer prisoners, but also more broadly the ways that regimes of normative sexuality and gender are organizing structures of the prison industrial complex. To be clear, Captive Genders is not offered as a definitive collection. Our hope is that it will work as a space where conversations and connections can multiply with the aim of making abolition flourish. 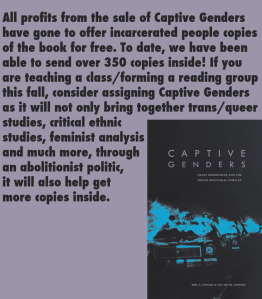 Desiring Abolition
Living through these forms of domination are also moments of devas- tating resistance where people working together are building joy, tear- ing down the walls of normative culture, and opening space for a more beautiful, more lively, safer place for all. Captive Genders remembers these radical histories and movements as evidence that our legacies are fiercely imaginative and that our collective abilities can, and have, offered free- dom even in the most destitute of times.11
In the face of the overwhelming violence of the PIC, abolition—and specifically a trans/queer abolition—is one example of this vital defiance. An abolitionist politic does not believe that the prison system is “broken” and in need of reform; indeed, it is, according to its own logic, working quite well. Abolition necessarily moves us away from attempting to “fix” the PIC and helps us imagine an entirely different world—one that is not built upon the historical and contemporary legacies of the racial and gendered brutality that maintain the power of the PIC. What this means is that abolition is not a response to the belief that the PIC is so horrible that reform would not be enough. Although we do believe that the PIC is horrible and that reform is not enough, abolition radically restages our conversations and our ways of living and understanding as to undo our reliance on the PIC and its cultural logics. For us, abolition is not simply a reaction to the PIC but a political commitment that makes the PIC impossible. To this end, the time of abolition is both yet to come and al- ready here. In other words, while we hold on to abolition as a politics for doing anti-PIC work, we also acknowledge there are countless ways that abolition has been and continues to be here now. As a project dedicated to radical deconstruction, abolition must also include at its center a reworking of gender and sexuality that displaces both heterosexuality and gender normativity as measures of worth.12
The Stonewall uprising itself must be remembered and celebrated as a moment of a radical trans/queer abolitionist politic that built, in those three nights, the materiality of this vision. As both a dream of the future and a practice of history, we strategize for a world without the multiple ways that our bodies, genders, and sexualities are disciplined. Captive Genders is also a telling of a rich history of trans/queer struggle against the PIC, still in the making. This is an invitation to remember these radical legacies of abolition and to continue the struggle to make this dream of the future, lived today.
This piece has benefited from the critical attention of Angela Y. Davis, Toshio Meronek, and Adam Reed. I am also indebted to The Institute for Anarchist Studies who provided support for the completion of this introduction.
Eric A. Stanley is a postdoctoral fellow in the departments of Communication and Critical Gender Studies at the University of California, San Diego. Along with Chris Vargas, Eric directed the films Homotopia (2006) and Criminal Queers(2013). A coeditor of the anthology Captive Genders: Trans Embodiment and the Prison Industrial Complex (AK Press, 2011) which won the Prevention for a Safe Society award and was recently named a finalist for a Lambda Literary Award, Eric’s other writing can be found in the journals Social Text, American Quarterly, and Women and Performance as well as in numerous collections.
The second edition of Captive Genders: Trans Embodiment and the Prison Industrial Complex is available from AK Press:  http://www.akpress.org/captivegenders2.html
Notes