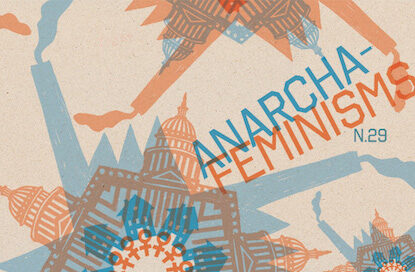 This is the introduction to the anarcha-feminisms issue of Perspectives on Anarchist Theory (N.29). The whole issue is available again from AK Press here!

Ok, editorial collective. Let’s talk this through. So, what are anarcha-feminisms and why do they need their own Perspectives issue?

Well, because these questions persist: what’s the relationship between anarchism and feminism? What critiques do feminists have of anarchists, and vice versa? Are anarchist spaces also feminist spaces, and if not, why not? Isn’t feminism supposed to be implicit within the meaning of anarchism, and therefore unnecessary to specify?

Supposed to be, yes. Maybe. Depends. Anarchist organizing and socializing environments are NOT always feminist (eyeroll if you agree–we thought so). The need to confront one another on the persistent failure of practices to live up to proclaimed ideals, suggesting that anarchist cultures haven’t always been able to sufficiently break free of the patterns of the society they’re trying to oppose and replace, is in itself enough of a reason for stating it explicitly.

But it may be even more than that. A certain ideal of anarchism may be feminist, and a certain ideal of feminism may be anarchist, but not all the polymorphous forms of anarchism or feminism fit that description, even at the level of principles and ideals. Just as there can be feminisms whose aim might be, for example, to insert women into state and corporate power structures, or traditional religious leadership, there can be anarchisms which promote individualist machismo in the name of autonomy, or which essentialize gender binaries in the name of “nature.”

Making feminism explicit in anarchism is a choice of emphasis and interpretation, among other possible emphases and interpretations. It’s an argument that gender is one of the primary structures of oppression, and that sexuality is a fundamental mode of exercising domination. And it’s an acknowledgement that where power systems affect different people differently, certain issues, such as health and incarceration, take on additional implications when viewed through the lens of gender.The pieces by Theresa Warburton and by Romina Akemi & Bree Busk provide some questioning of the feminism of anarchism and the anarchism of feminism. Alexander McClelland and Zoë Dodd and Collen Hackett (firehawk) address some of the specific issues.

If anarchism and feminism aren’t guaranteed to be synonymous, then what might anarchists and feminists have to offer each other? It may be (listen, manarchist!) that anarchism still has some things to learn about how to better realize its own ideals and aspirations, from other practitioners of counter-power. For example, in recent history, the roots of many anarchist organizing habits and creative aesthetics can be found in feminist and radical queer political cultures, while many anarchist analyses of power and emancipation have already been brilliantly articulated through the intersectional insights of feminists of color. (Raise your hands, non-cis white men, if you’ve ever had the experience of being ignored when you offer an idea, only to hear it praised when a man says it. We thought so.) 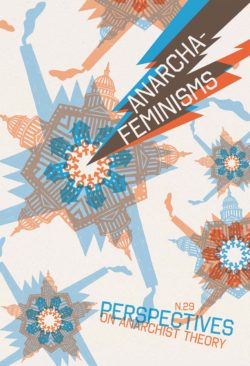 An anarchist feminism is an argument that heteropatriarchy is best dismantled through a radical attack on all hierarchical systems and structures of oppression and exploitation. A feminist anarchism is an argument that the successful abolition of all hierarchical systems and structures of oppression and exploitation, requires antipatriarchal tactics, visions, means and ends. The struggle for a world without domination and injustice continues on all fronts, and when considering the full range of intersectionality, emancipation has not yet fully occurred; anarcha-feminism is needed until all these aspects have been addressed. On some of the lessons for anarchism from Black and indigenous feminism, see the pieces by Hillary Lazar, and Laura Hall.

Since we’re identifying influences and affinities, is there anything like a canonical history of anarcha-feminist practice or theoretical discourse? And if there is, just because we honor our predecessors’ crucial contributions thus far, does that mean we can’t also push them further? (Would you rather herd anarchists, or cats? We thought so.)

Those who are much known, named and talked about as such are scanty. There’s the Enlightenment-era partnership of Mary Wollstonecraft, a woman considered a forebear of feminism, and William Godwin, a man considered a forebear of classical anarchism–a literal marriage of the two philosophies. There’s the early twentieth century triumvirate of Emma Goldman, Voltairine de Cleyre, and Lucy Parsons, the heroines of Cuban and Japanese insurgence, and then the Mujeres Libres of the Spanish Civil War.
Julia Tanenbaum’s piece zeroes in on some more recent history.

When Quiet Rumours appeared in the late 1970s, following a period of anarchic (if not necessarily anarchist) cultural and sexual revolution, it filled a gap to become a shared touchstone for any anarcha-feminist library. It gathered together some key texts that continue to have relevance: texts that were as historical to our comrade-aunts of a generation ago as they are to us now, as well as texts that were contemporary to them but now historical to us. Because of course time has passed, during which more voices have gotten out, the conversation has grown cumulatively, newer critiques have been aired, and more waves of political activity and social change have unfurled.  So now we engage with these texts of prior generations critically too, marking what they do and don’t say, can and can’t do.  This skimpy canon is necessary but not sufficient.  It’s part of a dialogue but not the final word. It’s now part of our history, but that history hasn’t ended and we have to keep the dialogue going, raising new questions. For a critical assessment of Quiet Rumours, recently reprinted by AK Press, see the review by Raeanna Gleason-Salguero. On new additions to the growing discourse, see reviews by Kim Smith, Sara Rahnoma-Galindo, and Kristian Williams.

And finally, the utopian question: Can an anarchist revolution happen without feminism? What would an anarchist society look like that had truly transcended all kinds of gendered power structures, oppressions and exploitations? A society in which all kinds of relationships were equally possible, from polyamory to monogamous pair bonding? In which all kinds of healthy, freely chosen reproductive choices were supported? In which binaristic gender hierarchy could be broken down, while in the process celebrating what’s been subordinated and devalued by the construction of that hierarchy? In which alternative structures of family or community existed, not limited to blood kin or nuclear units, to provide for the mutual care of all, at every stage from infancy to the end of life, enabling the multigenerational proliferation of radical countercultures? In which capitalism couldn’t extract a double surplus from the unpaid care work and reproductive labor, and the underpaid wage labor, of female workers? In which infinite forms of gender expression and sexuality were available for any body, with no penalization in terms of access to resources, opportunities, respect?

What would it look like if we really no longer needed to specify anarcha-feminism?