In the introduction to the book Taking Sides, the editor extends “an invitation to constructively debate the many thorny questions for which none of us have the answers.” In that spirit, and viewing our publication as a forum for vigorous and open debate, Perspectives presents the following review, and has specifically invited the book’s editor to respond in our pages. We also encourage you to join the discussion. We want to host debate and constructive engagement with the important issues that Taking Sides raises in our comments section. You can participate by leaving a reply at the bottom of the review. – Eds.
It was in a dusty lot in a residential corner of Albuquerque, New Mexico where Amalia’s story came spilling out.1 “This is the earliest memory of my mother,” she said, her eyes locked on a row of greens pushing through sandy soil under an open-faced hoop house. “I was less than two years old. She was picking a row of beets.” The last of ten children of Mexican and indigenous heritage in a family of farmworkers, Amalia says her mother was diagnosed with late-stage cancer while pregnant and given a few years to live.
“We were very poor and my mother felt I wouldn’t survive as a baby. My father worked constantly to feed our family and buy shoes for us once a year. My mother was friends with a white woman in a Jehovah’s Witness church who was married but couldn’t have children.” After her mother died the white couple adopted Amalia when she was still a toddler. “Right away they took me to a doctor because I was malnourished.”
“Then the woman who adopted me, a gracious and wonderful woman, was killed two years later in a car accident. So I lost my mom again.” Her adoptive father, Jack, became her primary caretaker. “He encouraged me as a woman to not let things limit me. He encouraged me to embrace my culture. He made relations with indigenous people in the area so he could take me to ceremonies. He really loved me.”

She spent two months every year with her biological family. “I was ashamed of being Indian, ashamed of being poor, and under a lot of violence in the home.” It was “extremely painful,” Amalia said. “But it was more painful to know that I had every toy in the world, all clothes I ever needed, and my brothers and sisters didn’t have.” When Jack dropped her off with her family, “He knew he was taking me to a place of brutality. He would cry and cry and I would reassure him that it’s just for a couple of weeks and I’ll be back. When he came to get me my siblings were hanging on to my arms and legs, screaming ‘Don’t take her!’ That was the hardest thing I ever had to do.”
Amalia recounted her story in the spring of 2012. She was a leader of (Un)Occupy Albuquerque. Months earlier, Occupy Albuquerque labored through a six-week process to change its name in recognition that the Southwest was already occupied. Amalia said this is not ancient history. Battles over treaties and the colonization of indigenous lands continue to this day in New Mexico. The apartheid Amalia was born into still stung as she recalled restaurants with signs saying, “No dogs or Indians allowed,” or how her mother, a US citizen, would be nabbed by the border patrol, dumped in Mexico, and made to walk back.
The name-change process embittered some Anglos who felt pushed out of (Un)Occupy and were trying to revive Occupy Albuquerque. Students, veterans, retirees and service-sector workers, they were anxious about their crumbling grip on middle-class security. Few were previously political. They found in Occupy an answer and hope, but months after the split they were confused and angry at being seen as oppressors.
Tami, a 51-year-old real-estate broker, said, “I understand white privilege, it’s real. I understand the institutionalization of discrimination that goes on with people of color. I don’t dispute that I am instantly privileged as a white person.” She said (Un)Occupy activists “don’t want to engage with you unless you read this pamphlet, ‘Becoming a White Ally.’ Because of my skin tone they think I am a racist. In my white expedient world I felt that we had to drop the pressure about racial issues.”
When discussing colonization, Tami said, “That was 500 years ago. You’re not getting land back. We are all here. Can’t we all just get along?” Occupy Albuquerque members warned of a Hispanic section of town. Tami said, “We are talking gangs, basically – people who have been poor for generations, people in that culture of gang mentality. There is a community there where they indoctrinate their children to hate white people.” Another member added, “They are stockpiling guns for a race war.”
The (Un)Occupy activists were mostly affiliated with the University of New Mexico and revered Amalia. Natalie, a PhD student, said if the Occupiers learned about racism and accepted (Un)Occupy’s analysis they could rejoin the group, but it was not the job of people of color to help whites overcome their racism.
I kept thinking of these encounters while reading Taking Sides: Revolutionary Solidarity and the Poverty of Liberalism (AK Press: 2016). Edited by Cindy Milstein, this collection of thirteen essays wades into the controversies swirling around identity politics. I wondered if this book could guide activists through what has become the most divisive issue on the Left. 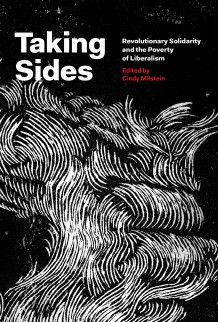 Arun Gupta is a founder of the Occupied Wall Street Journal and the Indypendent magazine, both in New York. He has written for publications including The Washington Post, The Nation, Salon, and The Guardian. He is the author of the upcoming Bacon as a Weapon of Mass Destruction: A Junk-Food-Loving Chef’s Inquiry into Taste (The New Press).
Taking Sides is available here, from AK Press!

5 thoughts on “A War of All Against All: A Review of Taking Sides: Revolutionary Solidarity and the Poverty of Liberalism, Cindy Milstein, ed. (Oakland: AK Press, 2015), by Arun Gupta”