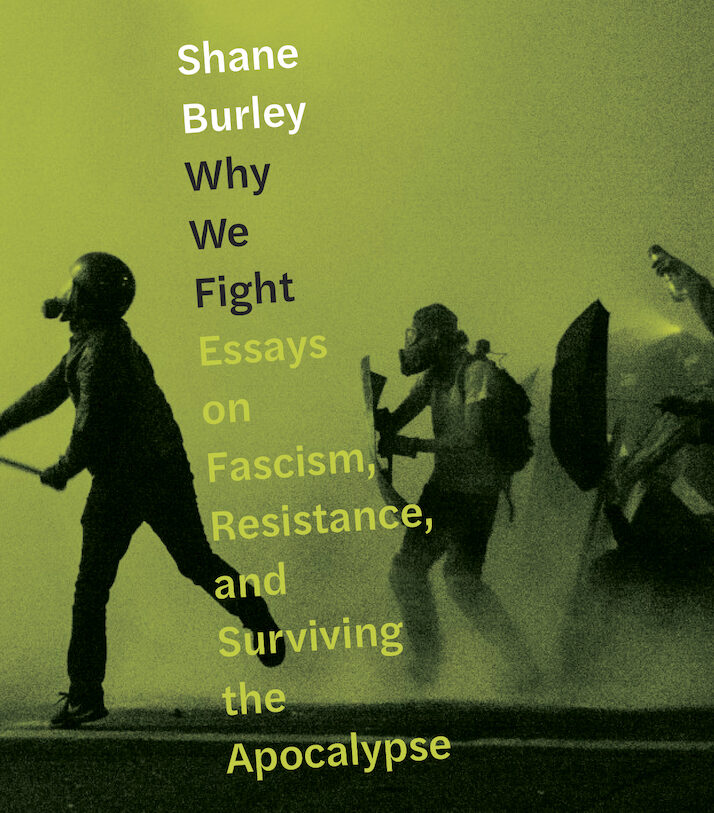 Why do we fight? Because fascism. Because resistance. Because surviving the apocalypse. In linking together these three themes, Shane Burley writes at a turning point in his new book, Why We Fight Essays on Fascism, Resistance, and Surviving the Apocalypse. He presents it as a moment of possibility, but not certainty; the future is unwritten, in the words of the prophet Joe Strummer.

Crisis and catastrophe aren’t just coming; they’re here. Accelerationism is unnecessary; the collapse is already on the way, whether we like it or not. The question is what we DO with it. Burley offers us the most fiercely hopeful take on post-apocalypse we could have.

Millenarianism and apocalyptic thinking are as American as apple pie, as he points out in his introduction. What was previously framed in theological terms, more recently wears secular political form. Either way, he says, the flourishing of conspiracy theories requires availability of materials and a breakdown of authority, which tend to emerge and strengthen in end time conditions. He locates the kind of meta-politics this generates at the core of fascist thinking. (Burley takes the welcome position that fascists do not own mysticism or mythology and cannot be allowed to discredit them wholesale. But beware when the Right co-opts ideas from the Left, or from spiritual and esoteric traditions.)

Yet, these very same conditions of crisis so conducive to fascism may also bring forth a counterpoint, antifascism, which proposes its own alternate dreams for a life beyond the end times. We have choices; we have agency in how to respond and what to build. Right and Left, emerging from a similar context—of ecological and economic breakdown, climate emergency, and neoliberal late capitalism—each offer their own prophetic visions looking forward to what could be.

Burley proposes a salvific messianism, not a catastrophic one. And the messianic power is in us, not in any deus ex machina. Collective self-salvation is the alternative to self-destruction.

And that means moving toward a way of healing, connecting, mutual aid and solidarity, rather than the way of the lone prepper isolated in a fortified bunker. The proliferation of mass protest activates the space of the new “resistance society” that expresses our need for survival in the face of the coming crises.

Weaving new community relationships based in justice (the urge to right wrongs) and generosity (the urge to create alternatives, moving toward dual power) is then implicitly revolutionary. Pushing against the catastrophic mindset that would fetishize collapse is the suggestion that the revolution resides not in the moment of collapse, but in the process of replacing the old world with the new. And these alternatives are emerging constantly, in day-to-day life. After all, Burley reminds us, apocalypse originally meant revelation, not destruction. Here he takes the old “crisis = danger + opportunity” formula and, without ignoring the danger, asks us to make a bold choice for opportunity.

Through the essays and articles in Why We Fight, Burley builds a multifaceted view of contemporary Far Right activities and resistances against them. From this journalistic mosaic we can piece together a map, timeline,and index of violent acts and incidents; a field guide to  the many strands, factions, individuals, and groups—assorted racists, Western chauvinists, identitarians and Kek cult mysticists—that make up the 21st century Alt-right.

Burley complements his reportage with thoughtful interpretive pieces delving deeper into specific aspects, such as esoteric spirituality, analysis of fascism (25 Theses on Fascism is a concise highlight of political theory originally published by Perspectives on Anarchist Theory), modernity and antisemitism (which he identifies as linked to the logic-structure of modernity itself), toxic masculinity; Rojava (as a living example of what Burley calls upon us to imagine as possible, a community daring to prefigure another way in the face of manifest crisis/collapse).

In Burley’s broader analysis, the primary contradiction is between fascism and antifascism, viewed comprehensively. That means recognizing that the germ of fascism in the American slave-holding settler-colonial project—as well as its continuities with contemporary phenomena like border fascism and eco-fascism, linking fear of invasion and white anxiety over “replacement” to fear of scarcity in climate crisis.  These continuities make it chillingly conceivable that fascists could take over the state with populist (pseudo-democratic) consent.

So why do we fight?

And, in an apocalypse that marks, as he reminds us, not the end of the world but of our world, i.e. society as we have known it:

To create a real fight we have to become post-apocalyptic, to think about how we build something new that protects people now and can give us the tools to find that sustainability. We have to fight because we have no choice, and we can’t do that simply by trying to protect what we have had. Instead, we must think about what we will need in the future, because we are there (171).

We fight to make that future. To build something that not only enables us to live through the inevitable collapse but to construct a new world on the other side. 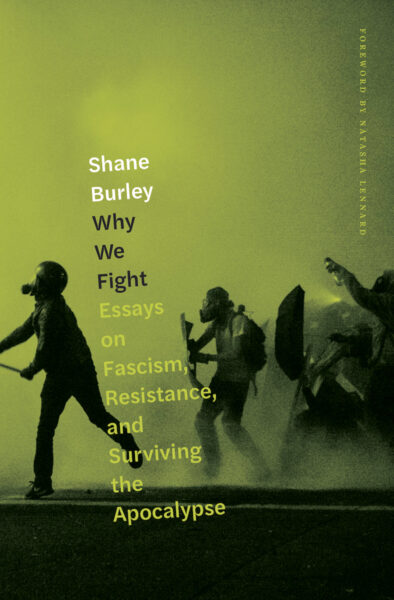 Maybe these connections come from my own preoccupations and interests that influence my book choices (or maybe it’s the overactive pattern-seeking of the conspiracy theorist), but some other books I happened to be reading recently all seemed to constellate a cluster of ideas. In other words, if Shane Burley had gone out to dinner with Harsha Walia, Eric Laursen, Erica Lagalisse and P. Djéli Clark, here are some things they might talk to each other about.

In Border and Rule: Global Migration, Capitalism, and the Rise of Racist Nationalism (Haymarket Books, 2021), Harsha Walia expands beyond her earlier Undoing Border Imperialism (2013, for the IAS/AK Press Anarchist Interventions book series), zeroing in at length on something Burley alludes to: the links between borders and security, racialization and criminalization, empire as a global structure of oppression both generating and forbidding migration, the domestic prison industrial complex, and the carceral logic of controlling people’s movement—curtailing both the freedom to move and the freedom to stay.

To my mind, this is central to making visible the hidden links between fascism and imperialism/colonialism: racism plus techniques of carceral discipline and militarized security.  “Anti-migrant xenophobia, immigration enforcement, detention centers, migration controls, and border securitization are ultimately the tentacles of a much larger ideological monster: the rule of racist, nationalist borders,” Walia writes.  “I align with a leftist politics of no borders, since the borders of today are completely bound up in the violences of dispossession, accumulation, exploitation, and their imbrications with race, caste, gender, sexuality, and ability” (213).  In this way, Walia’s analysis bolsters Burley’s argument that antifascism works as the counterpoint to all of this, as fascism infuses all those structures.

In a similar way, Eric Laursen’s The Operating System: An Anarchist Theory of the Modern State (AK Press, 2021), [full disclosure: I wrote the foreword] analyzes the state as all-encompassing programming for the world we live in. But in the face of the current state of crises—in economic and ecological collapse, and the mass migrations that will likely continue to follow in their wake—the state is a woefully poor operating system. Laursen assures us that the way to both surviving and thriving beyond the crises lies in another way.  Laursen’s state—clearly akin to Burley’s fascism and Walia’s border—not only lacks the capacity to meet those crises, but bears significant blame in their creation and intensification.

Erica Lagalisse resonates with another side of Burley’s work. In Occult Features of Anarchism: With Attention to the Conspiracy of Kings and the Conspiracy of the Peoples (PM Press, 2018), Lagalisse parses metaphysics in the anarchist tradition. She too traces a political theology consistent from the religious to the secular frame.Unearthing the esoteric side of the radical enlightenment, she historicizes the emergence of modern anarchism while noting the racialized, gendered, colonialist implications of a reductive rationalism, yet without rejecting rationality. There are conspiracies from above and below, conspiracy theories from the Left and Right; that which is occult(ed)may underwrite “the fantasies of fascism, the apocalypse of the dialectic, [or] the anarchist faith in an egalitarian social order” (113).

Last but not least is P. Djéli Clark’s Ring Shout, Or, Hunting Ku Kluxes in the End Times  (Tor, 2020).  This short but rich speculative alternate history set in 1920s Georgia blew me away, packing in a flow of dreams, nightmares, ancestral voices, a badass motley crew of resistance fighters, a diabolical white supremacist conspiracy, an apocalyptically climactic battle as Birth of a Nation flickers on Stone Mountain, and a powerful truth: thatdeep multi-generational pain, righteous anger, and hunger for justice do not, must not, equal hate.

This is why we fight.

Maia Ramnath is a member of the Perspectives editorial collective.