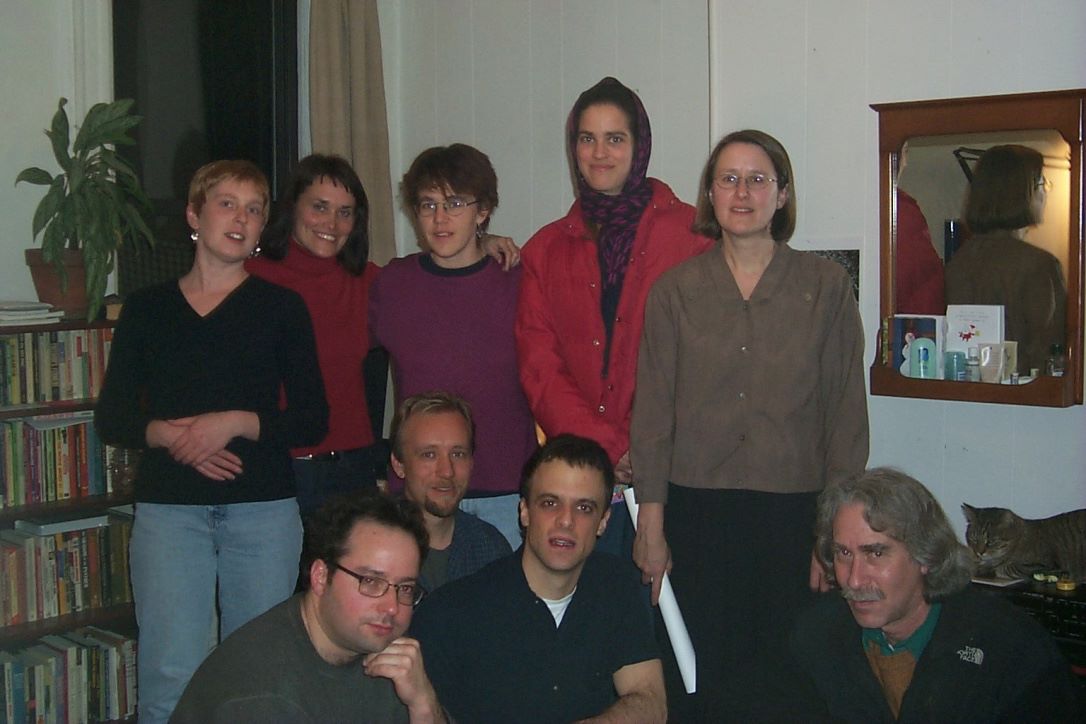 When the IAS was founded, I was a member of the Love and Rage Revolutionary Anarchist Federation. Love and Rage was an organization involved in local struggles and national mobilizations, with chapters throughout the US and Canada, and one that published Amor y Rabia in Mexico. People starting turning toward anarchism with the collapse of the Soviet Union, and it fully came into its own with the mobilizations of the Direct Action Network’s affinity groups and a black bloc at the World Trade Organization protests in Seattle.  The 1990s gave birth to a resurgence of anarchism, with it becoming a leading tendency on the Left.  Throughout this time, the IAS sought to aid a rigorous development of its ideas. 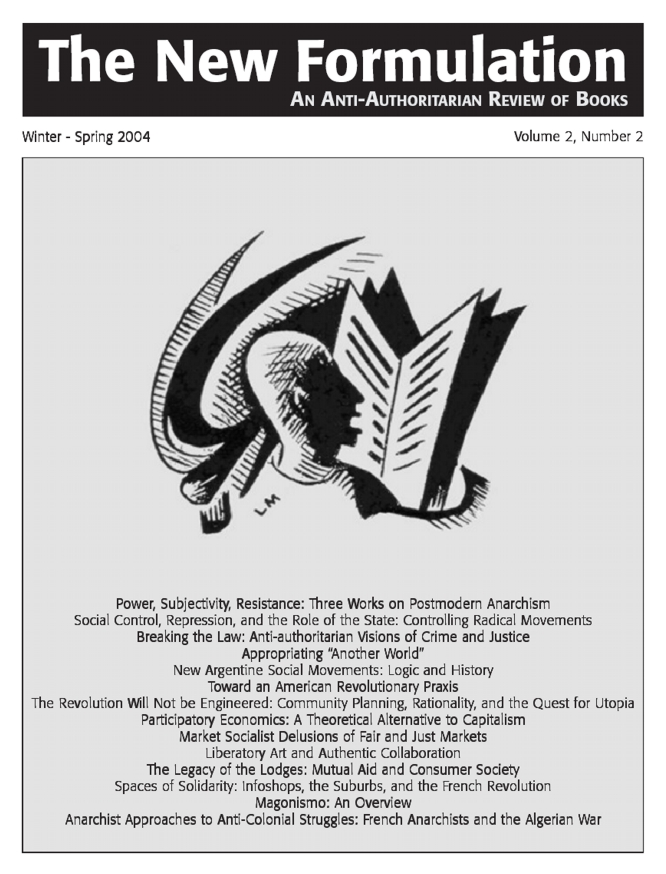 In the summer of 2004, Perspectives on Anarchist Theory merged with a journal, also started by Chuck Morse, a radical review of books called The New Formulation.  This established Perspectives as more than an IAS newsletter, becoming a substantial journal of its own.  In 2009 a new crew took over Perspectives publication, with Josh MacPhee doing all cover art and design, and has published the last seven issues. In 2017 Perspectives will celebrate its own 20th anniversary. 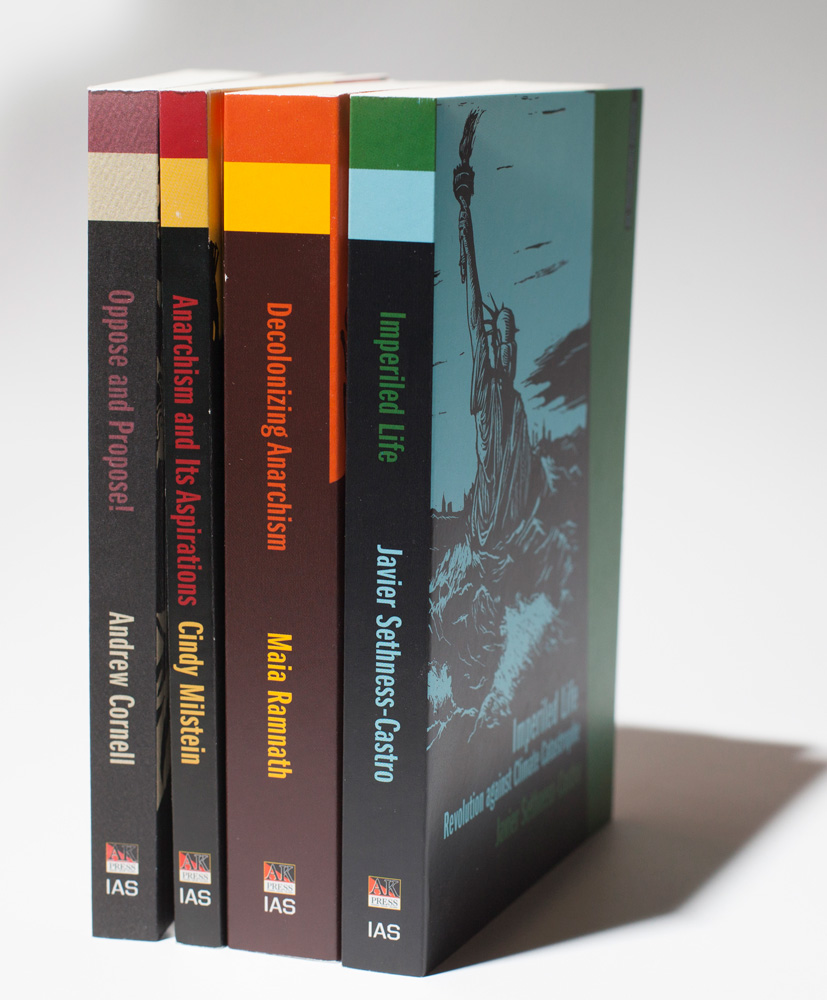 In 2010 the IAS started a book series with AK Press, called Anarchist Interventions (AI).  Since then we have published six well received books, including a basic introduction to anarchism; a history of Movement for a New Society, which showed links between organizers in the 1970s and ‘80s; revolution against climate catastrophe, drawing from the likes of the Frankfurt School and Hannah Arendt; decolonizing anarchism, addressing South Asian antiauthoritarianism; undoing borders, decolonization, and anti-imperialism; and anarchists against the wall, by people doing solidarity work in Palestine. We have new AI books in the pike. Last year we began publishing books outside the AI series (though also with AK Press), starting with the best selling sci fi collection of short stories, Octavia’s Brood: Science Fiction from Social Justice Movements, and continuing with this year’s Angels with Dirty Faces: Three Stories of Crime, Prison, and Redemption, by Walidah Imarisha. Early next year we will publish Kevin Van Meter’s Guerrillas of Desire: Notes on Everyday Resistance and Organizing to Make a Revolution Possible.

IAS members on the scene in New York City during the birth of the Occupy movement in 2011 found a need for a common radical language, and produced a series of Lexicon pamphlets, defining basic ideas, including white supremacy, anarchism, colonialism, gender, and power. We raised money to produce 33,000 copies of these pamphlets, which we distributed for free throughout the country.  This type of work has continued with support for people organizing in response to the rebellion in Ferguson and elsewhere, and the subsequent movement against the police.  One of our members lived in Ferguson for six months, getting to know folks whom she subsequently interviewed for a piece in Perspectives.
In its twenty years, the IAS has given out over one hundred writing grants to people from over a dozen countries. Awarding writing grants has been a largely satisfying process, as we’ve seen ideas turn into wonderful, widely read essays and books, offering insights from organizers and thinkers.  We continuously post original, widely read essays through Perspectives on our website, and also maintain a speakers’ bureau, allowing people to bring anarchist writers and organizers to their area to assist in local activist work or to help spread antiauthoritarian ideas.

When the IAS was founded, feminist, queer, and anti-racist anarchists were working to better develop their ideas and presence in the movement.  Today we take these connections for granted, but at the time, this was controversial.  This is the type of anarchism the IAS supports; one in which we work to dismantle all forms of hierarchy and domination, not just the state and capitalism, while engaging in the hard, daily organizing necessary to get us closer to a new society.

Over its twenty years, the IAS has sought to fund folks outside of universities in this task, aiding working-class, people of color, women, and those outside the gender binary.  We have preferred work by those striving to make sense of their organizing, or examine contemporary conditions, rather than histories of Krondstat or the Spanish Revolution, for instance. Our funding priorities are to assist work that will help advance the struggle for a free society in the here and now, rather than purely academic exercises.

Several years ago we decided to better channel the essays funded by our grants into Perspectives, by encouraging shorter essays, to be completed in six months.  We have also become much more involved in working with new authors to craft their writing through extensive editorial involvement. We encourage clarity in ideas, and writing in an accessible fashion. The result is the Perspectives collective has intense involvement with helping less experienced writers develop their work, and many incredible essays have subsequently appeared in Perspectives.

Anarchism has not yet reached its promise of fully developing theories to help us make sense of the world. We should continue to better implement practical, workable solutions and build lasting organizations. We still need to create motivating visions of alternative futures to counter the increasingly dystopian nature of our lives.  And we need to be creative in expressing our ideas through various print, visual and audio media and in face-to-face organizing.

The vast majority of the work done by members of the IAS is voluntary. We donate our labor. We do this in addition to our wage jobs, political organizing, raising children and living our lives.  We have one part-time, paid administrator to help us keep it all together, and to whom we are forever grateful. You can help make sure the IAS continues into the increasingly uncertain future. It takes the help and generosity of hundreds of people to make it possible for the IAS to give thousands of dollars in writing grants every year, publish Perspectives and our books, and do all our other our work.

Please take a minute to make a donation, or sign up to make monthly contributions. Together we can make a difference.
Paul Messersmith-Glavin has been a part of the IAS since its founding, is a member of the Perspectives collective, and belongs to the Hella 503 Collective in Portland, Oregon. He is writing a book on climate change and capitalism, with a view towards organizing to stop them both.