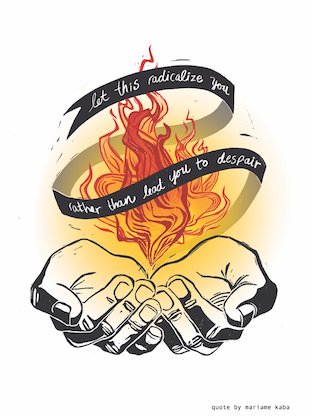 What has happened? In some ways, the answer is simple because what’s happened is the natural progression of a sick society that has forsaken collective stability and health (of all kinds) in favor of power and profit. In other ways, the answer is impossible because what’s happened is filtered through a completely surreal existence that, though shared, can somehow still feel incredibly isolating. Having both of these senses at once, of knowing exactly why things have turned out this way while being irreparably shaken by the consequences, has made attending to the question of power feel both important and impossible.

Here at Perspectives on Anarchist Theory, we began planning for this issue before COVID or the murder of George Floyd or last year’s round of wildfires and hurricanes or the truly punishing election cycle, the outcome of which has simultaneously transformed and solidified many of the things that were written before it. But we conceived of this issue within the structures that made those things possible. In this, the topic of “Power” has felt both the most concrete thing that links these times, places, events, and moods together while also slipping constantly around our minds as we’ve sought to do the work of bringing this issue into being. Everything we do to collect and share the materials that make up an issue of this journal depends on an infrastructure of resources and relationships. What happens when that infrastructure shakes? What happens when the power goes out?

Every time we turn on a light as dusk comes around, we draw on an infrastructure whose reach and shape are almost unimaginable. It is, to say the least, much bigger than ourselves. But when that power goes out, it can feel like we are left alone. The ways we’ve learned to move and guide ourselves around a space suddenly shift; different senses give us different directions and we depend on different ways of being to get us through it.

We might find ourselves digging something out of a forgotten drawer or finding that our bodies remember how to do things we rarely practice, like feel our way through a doorway. We might find that our senses adjust to the dark, seeing new shapes and contours or hearing things that are always there but obscured by the constant hum of that infrastructure that has gone out. We might realize suddenly how much we depend on that infrastructure, especially when we get hungry or cold or need to find our way down a treacherous staircase.

But we also find other infrastructures, new and old. We might find new ways to cast light, combine our resources, or huddle together for warmth. We might laugh about what people must have done before power or remind ourselves of the myriad people who live daily without it. We might find old blankets sewn by family or friends who are no longer earthbound, eat foods that we’d forgotten how to savor when the power gave us the ability to do infinite things at once.

So, maybe one way to explain what’s happened is that the power has gone out. We felt this in creating this issue, especially as we wrestled with a process that is both creative and constricting. For instance, how do we have deadlines during an ongoing uprising? How do we account for the eroding tensile strength of everyone’s physical, mental, and emotional capacities? How do we effectively represent this one moment when the production process stretches out across many months, requiring the careful attention of dozens of people along the way? We spent a long time thinking about how to adjust the infrastructure in ways that accounted for the demands of the moment, both personal and collective, while also making sure that we continued to honor the vision and work that comes with creating a print issue of an anarchist journal.

This process made us see pieces we’d already received in new light, gave us new directions for editing, and new ideas for things to include. It prompted us to draw on other infrastructures to create an online issue of the journal on Pandemics from the Bottom Up, which we saw as a way to support authors and ideas that needed to get out more urgently than a print issue could allow. But we also stayed committed to getting this issue into your hands, because the physical object is so much more than only the words. We wanted you to spend time with the prodigious art from Gallery of the Streets, facilitated by Kai Lumumba Barrow, whose work graces our cover. We wanted you to be able to turn a page and put it down while you grabbed another cup of tea. And, most importantly, we wanted to keep supporting the work of independent writers, publishers, artists, and organizers who form the very infrastructure that built the thing in the first place. So, some new infrastructure and some old.

Whether we think of power figuratively, literally, or somewhere in between, perhaps one of the most aphoristic answers to the question of what happens when the power goes out is that “it is better to light a candle than curse the dark.” And maybe that’s what we’ve done here. Though, on reflection, it feels like we did our fair share of cursing as well. But also, we spent time becoming more familiar with the nocturnal things, the secreted things, the silent things. When the power went out, we learned to think of the dark differently than needing to be illuminated by the light. Because as we adjust, we see different things; new worlds come about and alive in the darkness. To see darkness as an inherent problem that must be cured by the light (no matter how small) reflects a misunderstanding of the relationship between the two and how power is built into the infrastructure of that balance – to say nothing of the way it ties into the deep-seated denigration of the darkness against the veneration of the light. In this way, we also learned that the darkness is never a natural disaster. And neither are any of the other things our contributors offer here.

It takes new and old strength, new and old knowledge, new and old relationships to remember the infrastructures we already had when we’ve become dependent on others. It takes just as much work to build new ones. And, it can be tiring, inviting us into the comfort of something known if not trusted and warm if not consoling.

But instead of sleeping when the power goes out, we rise.

The current Power issue of Perspectives on Anarchist Theory, N.32, is available from Powell’s Books here or directly from the IAS here!