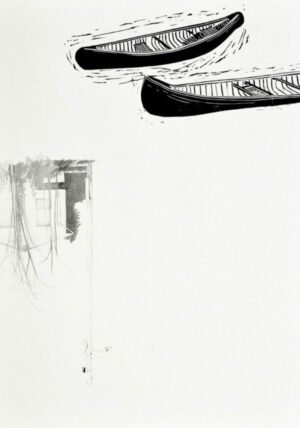 The current print issue of Perspectives on Anarchist Theory is on the theme of “Imaginations.” We asked a handful of IAS board members, authors, and contributors to tell us about some of the influences that have inspired their imaginations. Here are a few of their responses.

If our imaginations are shaped by the society around us, what cultural bits have helped form your most radical imaginings? What are the books, movies, songs, TV shows, camps, games, poems, or other forms that have informed your dreams of a better world?

“X Men and Star Trek (Next Generation most of all) are both the reason I ended up doing the work I do (hint: working with misfits and youth!) X Men helped me believe in my weirdo self and see this weirdness as powerful… Star Trek, for all the obvious reasons, but mostly I liked how they socially interacted, how they built kin across difference, and went toward the trouble, instead of retreating away from it. In our home we called Picard “Star Dad.” Very early on, Mad Magazine imprinted some deep distaste for suburbia, so I am grateful for that. Top books: The Dispossessed (Le Guin), 1984 (Orwell), Wildseed (Butler) He, She and It (Piercy), Mutual Aid (Kropotkin), All About Love (hooks)… Music, so much… too long to say. but in short, 70s and early 80s Punk really did the trick to ignite and help articulate my early fuck-the-system sentiments.” — carla bergman, co-author of IAS/AK Press book Joyful Militancy: Building Thriving Resistance in Toxic Times

“Reading Albert Camus’ The Plague as a teenager, I could see that the plot—which has to do with the outbreak and spread of a deadly plague in French-occupied Algeria—was an allegory for the struggle against fascism and authoritarianism. The commitment of the protagonists, especially that of Dr. Rieux, to combating the plague represents the courage of the French Résistance militants. This novel has inspired me to confront absurdity and socio-political reaction through heartfelt existential commitment. My reading in my undergraduate Russian history class of the anarchist Alexander Herzen’s memoirs, My Past and Thoughts. I will never forget reading how Herzen, the ‘father of Russian socialism,’ vividly recalls his reaction to Tsar Nicholas I’s suppression of the insurgent Decembrists, an officers’ group numbering in the thousands that attempted to overthrow Tsarism and proclaim constitutionalism during the transfer of power from Alexander I to Nicholas I in 1825. In their failed attempt, the Decembrists sacrificed themselves for the people in a manner reminiscent of the ‘revolutionary suicide’ advocated by Huey P. Newton. Herzen explains that his 14-year old self and his comrade Nikolai Ogarëv climbed Moscow’s Sparrow Hills to pledge their lives to avenge the Decembrists, by struggling against ‘that throne, […] that altar, [and] those cannons.’ Herzen writes: ‘I felt that I was not on the same side as the grape-shot and victory, prisons and chains.’ Encountering this, I knew I felt similarly: my ‘emergency heart’ pounding, I reinforced my commitment to the lifelong struggle against oppression.” – Javier Sethness Castro, author of IAS/AK Press book Imperiled Life: Revolution Against Climate Catastrophe

“I grew up on Arthurian legends and Celtic and Norse folklore, plus lots of convoluted, epic high fantasy—the longer, the better. I’ve always loved fantasy and sci-fi, the way the genres play on our dreams and fears at once, allowing us to imagine possible futures as well as alternative histories. William Gibson’s Neuromancer made a huge impact on my sense of the future, as did Ridley Scott’s director’s cut of Bladerunner and Richard Stanley’s Hardware. I’ve recently become re-inspired by afrofuturist feminist fantasy works, like Binti and Who Fears Death, by Nnedi Okorafor, as well as Akata Witch and Akata Warrior by Tomi Adeyemi.” – Lara Messersmith-Glavin, member of the IAS board of directors and Perspectives’ collective

“Even more than the music, the guiding principles and the do-it-yourself ethic of the punk and hardcore scenes illustrated to me how common peoples could construct new forms of life out of their dreams and desires.” – Kevin Van Meter, author of IAS/AK Press book Guerrillas of Desire: Notes on Everyday Resistance and Organizing to Make a Revolution Possible

“Night of the Living Dead, which I watched on a little TV at my grandma Nana’s place as a kid. What most impacted me was both the experience conveyed by the movie of being under siege with a diverse group of people, each of whose background comes into play in explicit fashion while defending against aggressive zombies, and also the ending, in which a group of white vigilantes murder the Black hero. Zombie scenarios have spoken to me ever since. Also, the Planet of the Apes films had a profound influence on my political imagination, particularly the ape uprising depicted in Conquest of the Planet of the Apes. And the Billy Jack films as well. In terms of music, growing up in working-class Chicago, metal expressed many of our emotions, but it was Progressive Rock (Prog) that really captured our imaginations and pointed to something different, something better. Prog was aspirational, whereas metal confronted our reality.” – Paul Messersmith-Glavin, member of the IAS board of directors and Perspectives‘ collective

“[There are] so many, [it’s] hard to choose, but some stuff I thought was a-MAY-zing as a kid just because it was, also partly because of the hard-to-describe haunting and unsettling and ominous qualities, while probably also absorbing some deep subliminal critiques of ecological destruction, militarism, anthropocentrism, and appreciation for the need for resisting and listening to all the creatures: Watership Down, The Secret of NIMH (and btw I just this morning heard the head of the Anthropocene Institute on the radio predicting the non-impossible odds that super-intelligent rats could be the ones to move into the gap left by the current extinction cycle), Chitty Chitty Bang Bang (why not), Star Trek: the Voyage Home (the one where the aliens are trying to get in touch with earth’s whales), and Qoyaanisqatse.” – Maia Ramnath, Perspectives‘ collective member and author of IAS/AK Press book Decolonizing Anarchism: An Antiauthoritarian History of India’s Liberation Struggle

What is a song that always makes you feel more hopeful? (In no particular order):
• Hang on to Each Other, by A Silver Mt. Zion
• Oskar Beck, by the Ex
• Toussaint L’Ouverture, by Carlos Santana
• The Trick is to Keep Breathing, by Garbage
• Imagine, by John Lennon
• Closer to Fine, by the Indigo Girls
• A las Barricadas (На Баррикады!), by Katalonia
• Luna Llena, by Los Cojolites
• 10 Commandments, by the Specials
• Forces of Viktry, by LKJ
• Ella’s Song, by Sweet Honey in the Rock
• For What It’s Worth, by Buffalo Springfield
• Feelin’ Good, by Nina Simone

What is a book you wish every young person could read? (Also in no particular order):
• The Earthsea Cycle, by Ursula K Le Guin (because it’s amazing, and kids need an alternative version of wizards to Harry Potter)
• Mutual Aid: A Factor in Evolution, by Peter Kropotkin (because it uncovers the cooperation, friendliness, and love that animate life in human and other animal communities—an understanding that surely resonates among children and young people themselves already! So it can only be good for many more of them to read Kropotkin’s scientific approach to the question.)
• Frog and Toad are Friends, by Arnold Lobel
• The Gospel in Brief, by Lev Tolstoy (it excises all the absurd fantasies from the New Testament about the supposed divinity of Jesus the Nazarene, leaving us instead with the compelling life-story of a Jewish revolutionary taking up a struggle for popular liberation, organizing with his comrades, and facing persecution and murder by the state for having done so.)
• Woman on the Edge of Time, by Marge Piercy
• Always Coming Home, by Ursula K Le Guin
• Moby Dick, by Herman Melville ([because it] depicts the lovely image of the titular whale liberating his fellow whales, who’ve been harpooned by the crew of the Pequod on the orders of Captain Ahab, together with the allegorical conclusion, which shows the whale altogether destroying the exploitative class society symbolized by the Pequod.)
• Sex is a Funny Word, by Cory Silverberg and Fiona Smyth

This piece is from the Imaginations issue of Perspectives (n.31). The whole issue is available from Powell’s Books here! and AK Press here!