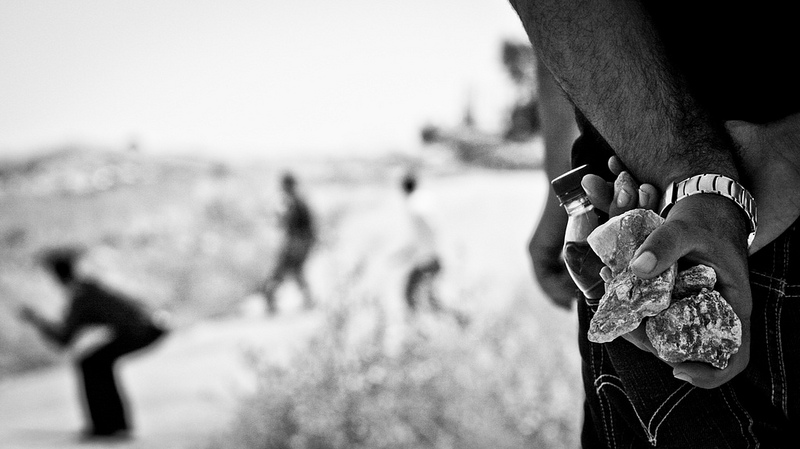 “I’m honestly still trying to kick the nationalist habit,” jokes activist Ahmad Nimer, as we talk outside a Ramallah cafe. Our topic of conversation seems an unlikely one: living as an anarchist in Palestine. “In a colonized country, it’s quite difficult to convince people of non-authoritarian, non-state solutions. You encounter, pretty much, a strictly anticolonial – often narrowly nationalist – mentality,” laments Nimer. Indeed, anarchists in Palestine currently have a visibility problem. Despite high-profile international and Israeli anarchist activity, there doesn’t seem to be a matching awareness of anarchism among many Palestinians themselves.

“Contemporary discussion of anarchist themes shifts emphasis towards more of an approach to power: rejecting power over, in favor of power with. “When you talk about anarchism as a political concept, it is defined as rejecting the state,” explains Saed Abu-Hijleh, a human geography lecturer at An-Najah University in Nablus. “It talks about freedom and society organizing itself without the interference of the state.” But, how do a stateless people engage with anarchism, a term that implies opposition to some form of state as a condition of its existence

In Palestine, elements of popular struggle have historically often been self-organized. Even if not explicitly identified as “anarchism” as such, “People have already done horizontal, or non-hierarchical, organizing all their lives,” says Beesan Ramadan, another local anarchist, who describes anarchism as a “tactic” yet questions the need to attach a label. She continues, “It is already there in my culture and in the way Palestinian activism has worked. During the First Intifada, for instance, when someone’s home was demolished, people would organize to rebuild it, almost spontaneously. As a Palestinian anarchist I look forward to going back to the roots of the First Intifada. It did not come from a political decision. It came against the will of the PLO.” Yasser Arafat declared independence in November 1988, after the First Intifada began in December 1987, Ramadan says “…to hijack the efforts of the First Intifada.”

The Palestinian case has been further complicated in recent decades. The landscape of largely horizontal self-organization in the First Intifada, was displaced in 1993 with the signing of the Oslo Accords and the top-down Palestinian Authority (PA) they created. “Now here in Palestine,” Ramadan observes, “we don’t have the meaning of authority that other people defy…We have the PA and the occupation, and our priorities are always mixed up. The PA and the Israelis [are on] the same level because the PA is a tool for the Israelis to oppress the Palestinians.” Nimer also shares this view, arguing it has now spread much more widely and that many now see the PA as a “proxy-occupation.”

“Being an anarchist doesn’t mean having the black and red flag or going black bloc,” Ramadan points out, referring to the established anarchist protest tactic of wearing all-black clothing and covering faces. “I don’t want to imitate any western group in the way that they ‘do’ anarchism…it is not going to work here, because you need to create a whole consciousness of the people. People don’t understand this concept.” Yet Ramadan believes the low visibility of Palestinian anarchists, and lack of awareness about anarchism among Palestinians more broadly, does not necessarily mean that few exist. “I think there are a good number of anarchists in Palestine,” she notes, although later conceding, “…mostly, for now, it is an individual belief [although] we are all active in our own way.”

This lack of a unified anarchist movement in Palestine could come as a result of the fact Western anarchists never really focused on colonialism. “[Western writers] didn’t have to,” argues Budour Hassan, an activist and law student. “Their struggle was different.” Nimer also adds: “For an anarchist in the US, decolonization might be a part of anti-authoritarian struggle; for me, it’s simply what needs to happen.”

Importantly, Hassan extends her own understanding of anarchism beyond positions merely against state or colonial authoritarianism. She refers to Palestinian novelist and Arab nationalist Ghassan Kanafani, noting that although he challenged the occupation, “…he also challenged patriarchal relations and the bourgeois classes… This is why I think we Arabs – anarchists from Palestine, from Egypt, from Syria, from Bahrain – need to begin reformulating anarchism in a way that reflects our experiences of colonialism, our experiences as women in a patriarchal society, and so on.”

“Just being part of political opposition won’t save you,” warns Ramadan, who adds that for many women, “When you stand against the occupation, you also have to stand against the family.” In fact, the over-emphasized portrayal of women at protests, she maintains, masks the fact that in reality many women have to fight just to be there. Even attending evening meetings requires young women to overcome social boundaries not faced by their male counterparts.

“As Palestinians, we need to establish the connection with Arab anarchists,” Ramadan says influenced by her reading of material from anarchists in Egypt and Syria. “We have so much in common and, because of the isolation, we end up meeting international anarchists who sometimes, as good as their politics are, remain stuck within their misconceptions and Islamophobia.”

In a short piece published on Jadaliyya entitled “Anarchist, Liberal, and Authoritarian Enlightenments: Notes from the Arab Spring” Mohammed Bamyeh argued that the recent Arab uprisings reflected “…a rare combination of an anarchist method and a liberal intention,” noting that “…the revolutionary style is anarchist, in the sense that it requires little organization, leadership, or even coordination [and] tends to be suspicious of parties and hierarchies even after revolutionary success.”

For Ramadan, nationalism also represents a significant problem. “People need nationalism in times of struggle,” she concedes, “[But] it sometimes becomes an obstacle… You know what the negative sense of nationalism means? It means you only think as Palestinians, that Palestinians are the only ones who are suffering in the world.” Nimer also adds, “You’re talking about sixty years of occupation and ethnic cleansing, and sixty years of resisting that through nationalism. That’s too long, it’s unhealthy. People can go from nationalist to fascist, quite quickly.”

December’s crowds in Cairo’s Tahrir square may yet offer hope to Palestinian anarchists. As President Mohamed Morsi consolidated executive, legislative and judicial powers under his office, anarchist groups joined the demonstrations. These Egyptians actually call themselves anarchists and embrace anarchism as a political tradition. Back in Ramallah, Nimer reflects: “I’m often pessimistic, but you can’t discount Palestinians. We could break out at any moment. The First Intifada began with a car accident.”

This article originally appeared in the Lebanese magazine The Outpost.