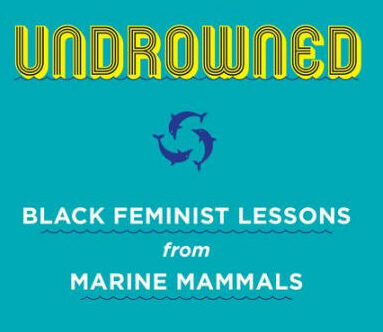 It begins with breath.

That is, it begins with the planetary cycle of respiration connecting forest, ocean, air, and every creature. 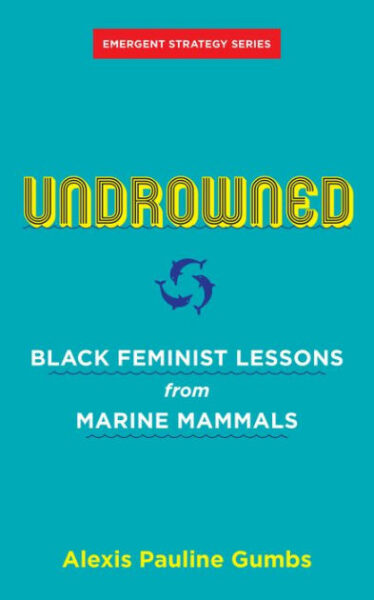 It’s a set of nineteen meditations on themes inspired by aquatic animals as kindred souls, teachers, and mentors, demonstrating their marvelous knowledges and capabilities for navigating depth, pressure, turbulence, ice, storm, predation. Altogether our fellow mammals bring a wealth of “subversive and transformative guidance” (7) for not drowning in an environment that would steal breath – whether under water, or in a social reality brought into sharp focus this past year by both respiratory pandemic and the latest racist police violence.

These meditations are “thematic movements … organized around core Black feminist practices like breathing, remembering, collaborating, etc.,” (10) that open toward emergent, actionable insights. Each one weaves marine science, art, history, ethnology, politics, and mythology – especially from cultures most closely intertwined with the life of sea mammals – into what sounds as much like love songs as spiritual incantations. (The only other author that comes to mind who so deftly handles this many intricate threads is Rebecca Solnit.)

Undrowned is also a guidebook, but one that stands in stark contrast to those marine biology texts that offer their factual data in a neutral scientific tone while also projecting capitalist, colonialist, and patriarchal logics onto marine animals.

Taken instead on their own terms, belugas, narwhals, right whales, bowhead whales, riverine and oceanic dolphins, seals, sea lions, orcas, and manatees (plus the odd shark or manta ray) have much to teach: in navigating ice or sustaining breath in cold depths; shaping physicality to a fluid environment; the power of the dorsal fin (the bridge of the back) for path making and stabilization; surviving captivity through community; surviving genocidal commodification of one’s body under global capitalism; defying isolation by swimming in schools or pods; synchronizing movement as a model for large-scale direct action; “pantropical” multispecies marine clusters as analogs for collaboration in diasporic cooperatives; the fugitive advantages of hybridity (eluding domination and exceeding its categorizing knowledge); offering the wholeness of one’s self while loving the whole of someone else, scars and all; and much much more.

What begins with respiration moves through inspiration to activation: the closing chapter offers suggestions for embodying the themes of each section, including appropriate variations for both Black and non-Black readers, in individual and “pod/squad” versions. “What are the intergenerational and evolutionary ways that we become what we practice?” prompts Gumbs. “How can we navigate oppressive environments with core practices that build community, resistance, and more loving ways of living?” (43).

What’s more, Gumbs reminds readers that the waters in which marine mammals exist are a medium not only of breath, but of sound; in which echolocation – sending out signals, and even more importantly, listening for the pings back – places bodies in spatial relationship to their surroundings, structures, and other beings. “Some of this magic is just the complexity of being a mammal alive in sound. I can hear what I cannot see yet. I can make a whole world of resonance. And live in it. Swim through it. Reflecting you. Whistle, click if you can feel that I am here” (18).

Most fittingly then, each of the nineteen sections is planned to have its own musical counterpart by Toshi Reagon, to be released together as “Long Water Song.”

Until that’s available, there’s always the Hugo-nominated song “The Deep” by the experimental hip-hop partnership Clipping (William Hutson, Jonathan Snipes, and Daveed Diggs), inspired in turn by the Afrofuturist mythology of 1990s electronic music duo Drexciya (James Stinson and Gerald Donald). Then read the speculative novella The Deep by Rivers Solomon, which reinterprets and expands the song into a new medium. This emergent body of collective work clearly exists within the same ecosystem as Undrowned. 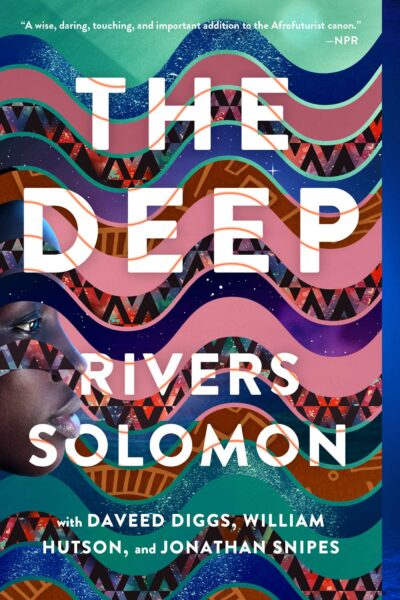 Gumbs reminds us that the oceanic world through which her cetacean teachers move is also the world of the three-century-long brutality of the transatlantic slave trade, in which the millions who did not survive made a trail of graves below the water. Now imagine that the descendants of pregnant African women, kidnapped and thrown overboard from slave ships, were born into ocean, nurtured by cetacean “second mothers,” then mutated and sea-changed into a submarine society of “strange fish” – the wajinru. Finned and gilled, they too exist in a medium of water-borne signals: sound, pressure, electricity.

In a culture based on the management of listening and remembrance, the ancestral memory of the wajinru foremothers is borne by one member, the historian of that generation, keeping the others shielded from the legacy of trauma except during a certain designated time of sharing. The ancestor who established this practice and relationship aimed to keep them safe from the pain, loneliness, abandonment, and fear that their forebears had known.

The burden takes its toll: historian Yetu is nearly broken by the weight of the memory she bears, drowning her individual selfhood. Fleeing the role and her people, she breaches the surface and battles the surf.  On shore she encounters some “two-legs” – alien, yet distant kin – and forms a particular relationship with one, a tough mariner who feels another kind of fraught connection and fierce responsibility to a lost homeland across the sea.

Not all wajinru regard the two-legs as potential friends or allies: another historian unleashes titanic powers of storm and wave in anger at their oil drilling, exploitation, and despoliation of the depths. Perhaps the land mammals in question should be listening to Gumbs, learning from marine beings about “the vulnerability, collaboration, and adaptation we need in order to be with change at this time, especially since one of the major changes we are living through, causing, and shaping in this climate crisis is this rising of the ocean.”

Yetu and her community need to renegotiate the balance between self and collective, past accountability and present agency, land and sea life, freedom to seek joy and love, and responsibility to bear witness to pain and hardship – neither being totally cut off from history nor being totally consumed by it is survivable. (For anarchists, what might also come to mind is the danger of centralizing too much knowledge and labor into the hands of too few, rather than decentralizing it and sharing access.)

So, why not suppose that amongst the whales, dolphins, and sharks of Gumbs’s meditations might also exist wajinru, who have long been learning the lessons that she brings forth to the surface for us legged and lunged ones now: Listen. Breathe. Remember. Be vulnerable. Be present. Be fierce. Collaborate. Learn from conflict. Honor your boundaries. Go deep.

This review appears in the Power issue (n. 32) of Perspectives on Anarchist Theory, available from from AK Press by clicking here or directly from the IAS by clicking here.

(Thank you, Chika, Libertie, Theresa, and Koala, for showing me cool stuff.)

Maia Ramnath is the author of Decolonizing Anarchism: An Antiauthoritarian History of India’s Liberation Struggle (IAS/AK Press, 2012), and Haj to Utopia: How the Ghadar Movement Charted Global Radicalism and Attempted to Overthrow the British Empire (University of California Press, 2011). She lives in New York City.