The Institute for Anarchist Studies, in conjunction with our comrades at AK Press, have proudly published Guerrillas of Desire: Notes on Everyday Resistance and Organizing to Make a Revolution Possible, by Kevin Van Meter. Join Kevin and friends and comrades as he launches his book at Powell’s Books, on Hawthorne, in Portland, Oregon.

Feminist-scholar Silvia Federici says it is “beautifully written” while illustrating “the power of the refusal of work of those capitalism has subjugated,” radical philosopher George Caffentzis believes it is an “important exploration of the revolutionary possibilities of our time.”

Behind the smiling faces of cashiers, wait staff, and workers of all sorts, a war is going on, usually without the knowledge of official political and labor organizations. Guerrillas of Desire begins with a provocation: The Left is wrong. It’s historical and current strategies are too-often based on the assumption that working and poor people are unorganized, acquiescent to systems of domination, or simply uninterested in building a new world. The fact is, as C.L.R. James has noted, they “are rebelling every day in ways of their own invention”: pilfering, sabotaging, faking illnesses, squatting, fleeing, and counter-strategizing. Kevin Van Meter maps these undercurrents, documenting the history of everyday resistance under slavery, in peasant life, and throughout modern capitalism, while showing that it remains an important factor in revolution and something radicals of all stripes must understand.
Come hear Kevin read from his book with us!

Get a copy of Guerrillas of Desire today right here! 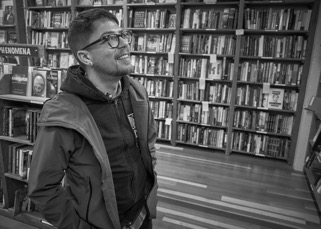 Kevin Van Meter is an activist-scholar based in the Pacific Northwest. He is coeditor of Uses of a Whirlwind: Movement, Movements, and Contemporary Radical Currents in the United States and a contributor to Life During Wartime: Resisting Counterinsurgency, We are Many: Reflections on Movement Strategy from Occupation to Liberation, and Constituent Imagination: Militant Investigations, Collective Theorization