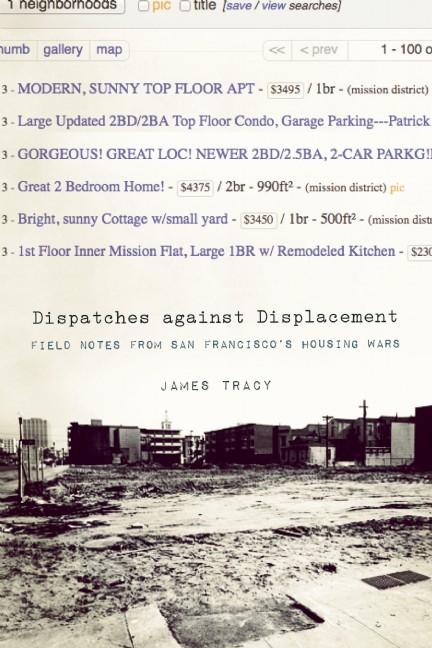 Potluck and round-table style discussion.
San Francisco is being eroded by waves of cash flowing north from Silicon Valley. Recent evictions of long-time San Francisco residents, outrageous rents and home prices, and blockaded “Google buses” are only the tip of the iceberg. James Tracy’s book focuses on the long arc of displacement over almost two decades of “dot com” boom and bust, offering the necessary perspective to analyze the latest urban horrors. A housing activist in the Bay Area since before Google existed, Tracy puts the hardships of the working poor and middle class front and center. These essays explore the battle for urban space—public housing residents fighting austerity, militant housing takeovers, the vagaries of federal and state housing policy, as well as showdowns against gentrification in the Mission District. From these experiences, Dispatches Against Displacement draws out a vision of what alternative urbanism might look like if our cities were developed by and for the people who bring them to life.

Co-sponsored by the Institute for Anarchist Studies, the Hella 503 Collective, PDX Solidarity Network, Black Rose Anarchist Federation, PDX Anarchist Black Cross, Oregon Jericho and others!
James Tracy is a Bay Area native and a well-respected community organizer. He is co-founder of the San Francisco Community Land Trust (which uses public and private money to buy up housing stock and take it out of the real estate market), as well as a poet and co-author of Hillbilly Nationalists, Urban Race Rebels, and Black Power.