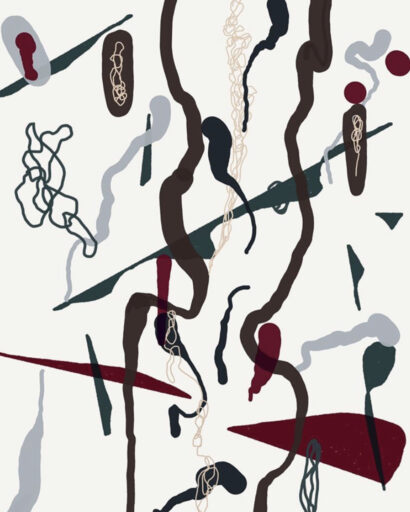 The highway that connects Los Angeles to Phoenix is called many things, but the strip between these two cities is known as the Christopher Columbus Transcontinental highway. A sardonic name given the elimination of First Nations and Native peoples in the southwest United States. While you’re driving you pass through some of the most brutal abandoned places in the hot Mojave, Colorado, and Sonoran deserts.

In 2019 I moved to Phoenix to help my grandmother die. Becoming a death doula was a life changing esoteric experience and I am a better person for it. The threads of death in my family come from a long line of homeless women, prostitutes, street musicians, and prisoners. My family is not of the working-class because they are unemployable. And this is where I have chosen to locate my experimental theory on helping those die that very few care about.

The rapid cycling of life and death is something we must contend with right now. After my grandmother died, in the summer of 2020, I decided to carry out my death doula work with the Joshua Tree National Forest. I began to apply this esoterica not just to humans but to plants and animals who are dying with very few seeming to care. These species living and dying have knowledge and secrets untold. Climate change is shifting all species into chaotic and unknown directions.

Around the Fall of 2020 I visited the Salton Sea, south of Joshua Tree, trying to discover why a family member would choose to vanish there, hoping to heal her from lifelong schizotypal suffering. The Salton Sea is considered California’s greatest environmental disaster and in its creation the Torres Martinez tribe was almost eliminated. The water is infected with botulism and an alkaline mist surrounds the air creating the illusion of ghosts sticking to your skin. Moving between these cities amidst the pandemic, I grew to understand that the governmental response to global environmental health crises, mass death, and austerity would be that of abandonment.

Contending with abandonment is so deeply sad and disparaging but also opens up a way of passionately connecting with people in building a life worth living without the state. Unfortunately, I don’t see that being easily implemented. I do believe, however, that this is something interesting to better understanding climate change: a Surrealist methodology that integrates technological communion, interspecies communion, and can be co-responsible for the life and death futures of all living creatures.

A global pandemic requires global care. COVID-19 has exposed many structural failures. From homelessness, healthcare, prisons, immigration, and food distribution; life currently in the United States under COVID19 has been one cruel and glaring failure after another. Murderous police have taken the streets to turn chemical weapons on its citizens across the world. In the United States a policy of abandonment and tone-deafness has infected cities’ governments.

Instead of responding appropriately to mass murder, mass pandemics, no money, no food, and no shelter, governments have instituted curfews, made protesting illegal, and have closed down COVID-19 testing sites as political retaliation. It is no longer appropriate to think of the current order of things as a system of economics but that of a death cult.

To be asked to die for your economy with no access to a doctor is death cult logic. Holding onto the vestiges of private profit based health care regardless of its inability to prevent the spread of diseases is death cult logic. Capitalisms’ only success is based on accumulation and production- at the risk of human and planetary extinction. What we are experiencing is not genocide but a democide. The demos is killing its people en mass while removing all grieving rituals and time to reflect on mass death and loss.

The Left has proved itself beyond ineffective in responding to this crisis. The plain lack of imagination in any progressive political party has made many rightfully apathetic. COVID-19 has the ability to move the Left in an actually effective direction if it can focus on meeting peoples’ basic need for survival while tying that to planetary survival.

Personal donations and individual acts of reparation through Venmo are not sustainable for long term mutual aid and community care. Creatively turning our ideas on their heads and fostering a new tendency of imagination is imperative. This means talking about house work as work, not just full employment and working from home.

A Surrealist methodology would call on all of us to go to the dark and unknown parts of our dreams and imagination to go beyond what is offered in capitalist reality. Housing as a basic given, not just restrictions on evictions and delaying rent. Moving beyond shelter for people and into an understanding of planetary habitability. We need to go beyond the idea of human rights and rights in general as the government is not the purveyor of planetary care and freedom. Medicine and healthcare are basic necessities that need to be separated from the profit based growth of health insurance companies. The COVID-19 vaccine is not available in other countries due to intellectual property and for-profit enterprise in science and global medicine which truly is evil. Thus this surrealism and this revolutionary thought must go beyond western individualist thought to collective responsibility. An economy based on distribution instead of accumulation.

Western knowledge has placed human knowledge at the center of intelligence which has created an environmental mess. The sunburn of Enlightenment is real with a hot house earth. We literally cannot breathe the air and there is no water.

My Surrealism blends the human/animal/plant distinctions into collective intelligence and strategy building. In botany the rhizome is an essential part of xylology: the function of wood and the system of plants. The root is something that all plants also experience. The root and the rhizome work together in creating collective health among plant species. The term rhizome is a pass of roots, creeping root stalks and developing buds that grow horizontally instead of vertically like the root. Rhizomatic organizing is different from radical and root organizing.

Plants and root systems have knowledge of collective care. What could flower from learning the language of plant life in emerging death? The earth systems are in crisis and there is the potentiality of air in critical theory. Air is life support. We can go long periods without food and water while almost no time without air.

Ideas of democratic openness come with the territory of explaining air. Its political disposition is to free and open societies. Breath and air are the entry point of so many existences. Global inequalities are reproduced through air. Most of the poor across the world suffer from asthma or other respiratory illnesses. COVID-19 has created spaces of unbreathable existence. Weather is weaponized and the use of retaliatory chemical weapons like tear gas on people is rampant. This has created a world where atmospheres are political; moving people from nations to violent borders, creating and proliferating disease, moving traditional labor to precarious brutal project work.

Death Futures sees the responsibility of creating a possible future both out of and inside capitalist ruins. This will require a dissolution of empirical thought. The hubris of modern human-centric knowledge has alienated us first from the rest of the planet. It has also eliminated knowledges and refused to accept the knowledges of those outside of empirical measurement.

A Surrealist methodology for understanding the globe works through the unknown, dark matter, dreams, and the mystic: a theory of passionate moments that is able to see eliminated languages of people, plants, animals, and the cosmos, allowing them to resurface and bloom.

Climate change will proliferate a lot of species while eliminating countless others in its path. How we will contend with the rapid and changing cycles of life and death will require a step into a surreal darkness where a new kind of love is made in that dark. An imaginative way out of this suffering is necessary to escape the myopia of profit based enterprises in planetary care. The future of life is surreal and the future of death will be surrealist whether we like it or not.

Catherine Marr lives in Joshua Tree, CA. She is a visual artist, DJ, autodidact, life-long revolutionary, and writer. She is working on her Masters at the European Graduate School in Valletta, Malta working on topics of Surrealism, climate change, revolution, and animal communion. Her musical selections of post-punk, left field, and techno can be found on Soundcloud here and on Instagram here. Her piece, “The World is Dying, Darling,” written under the name Vera Rubin, appears in the Power issue of Perspectives on Anarchist Theory (n.32), available from AK Press.

Art, by Catherine Marr (Death Futures I & II), as is the photo.