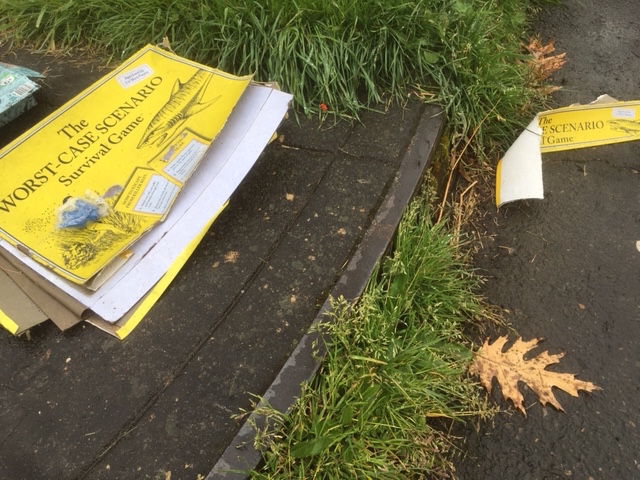 This piece is part of Perspectives’ special online issue “Pandemics from the Bottom Up.” The IAS will continue posting essays on this theme over the coming weeks. Please support our work here: https://anarchiststudies.org/support-the-ias/

There’s a legend i’ve heard about Smith College, back east where i came to be, that there is a network of tunnels connecting the campus. Those tunnels, meant for student passage between buildings during snowy seasons, had to be made extra wide due to the fashion of large skirts in the era (Smith was founded in 1871). I have enjoyed, since i heard of that, imagining those students, books clasped in their arms, their earnest or teasing voices meeting and reverberating in the tunnels as they brushed along in their fabric bubbles. Unfortunately this seems to be nothing more than legend, as i can find no trace of it on the internets.*

But so as i walk the sidewalks on my way to and from work, i like to picture everyone wearing 6′ diameter hoop skirts, swooshing along the sidewalks, slaloming from side to side to make sure no one’s fancy flounces disturb another’s spring-tinted sateens.

Or i imagine bubbles, delicate filmy bubbles of mutual courtesy and care. Force fields of atmosphere, maintained with attention. At work, we keep our six plus foot distance from each other, and from customers. It’s a dance where sometimes i have to take lead, communicate bodily, while continuing other conversation on the verbal level. The tables and racks of plants become ever-shifting mazes, each traverse charted according to the pace and trajectory of the other bodies. I try to remember that this spell is a spell of mutual care, and this means that i have to radiate that care. On the sidewalks, some people make that part difficult — they take any other’s existence as a threat, and flinch, flying to the side exaggeratedly. Or they have their earbuds screwed in tight, their jaw clenched, and their eyes fixed far into some other world they don’t have to share with others. At the nursery, people in general are so grateful to be there. We workers are thanked regularly. People often respond glowingly to the care in the bubble. We are doing a dance: you step forward, i step back. We are playing a game; can we do what we need to do, but with this new restriction? Played this way, it’s like that game where you try to say rutabaga without showing your teeth or laughing. It’s like trying to use your non-dominant hand instead. It’s similar to talking around a common glyph, avoiding, say, e. I always did horribly at that task. I do better at this one. It’s collaborative.

The hard part of this distancing at work—other than not being able to hug anyone, even though we’re all under stress and i haven’t had a single hug in weeks—is navigating the smaller spaces, like the kitchen. We have to do a lot more communicating. “I just need to get water at the sink.” “I’m passing through to the office.” “I’m going that way.” “You go first.” We treat each other with exceeding courtesy.

One practice of together-while-apart is simultaneity. One New Year’s Eve in the 90s, i arranged to light simultaneous candles with a friend who was in South Africa. We wrote each other letters about where we were, intensifying and extending the moment. I know many people are doing a lot of video. I don’t video, but i do get into simultaneity, just knowing that our attention is tuned to the same thing, knowing we are synchronized in that way. Chris has been occasionally broadcasting music on 123Bricks, and inviting requests. I listened to it while gardening and knew that Shannon and Alyssa and others were listening too, and Chris was listening and guiding, and the music itself was another presence. I appreciated that.

Last week, i did make it to the archery range before dark. It was closed, because the parks dept is doing the smart thing. But i was defiant… archery seems like a very non-infective sport. It was my birthday, i had walked all the way there, and i was ready to grimly render those facts to any person trying to stop me from loosing a flight of arrows. Loosing those arrows took the grimness out. Lighting a candle to dine with Megan also took the grimness out. Gazing into that candle.

I’m trying to find ways to replace rituals of togetherness; i chose simultaneity to try to capture some of mending day. If you’re not already familiar with it, i hold mending day on the last Saturday of every month, and invite people to come and do at my house the mending that gets shunted and piled to the side at their houses. A time to be quietly together and productive and supportive as a group. So this past Saturday i did mending day, making the tea, taking out the thread and everything, but alone at the table and posting progress on Instagram. Some sent me pictures of what they were working on: Annie! Shannon! Alyssa! And Chris made a soundtrack. I also recorded myself reading for people, so they could participate in yet a larger circle, Robert Macfarlane’s global read-along of The Living Mountain.

That all worked ok enough that i’m going to do it again this Saturday. Turn up the frequency, more repairs for more stresses. Chapter two of The Living Mountain and music curated by Squim starting around 1, Pacific Time. I’ll be posting again to Instagram, documenting my repairs and yours, if you send me photos.

I’ve mentioned Chris a couple of times; Griffin and i invited him to come stay in our guest room for this time, because although being alone can be a valuable and precious state, that’s only if it’s voluntary. Solitary confinement is cruel and unusual punishment. Today, Chris and i experimentally determined that we didn’t have the right skillet to make an omelet like Julia Child, and likewise determined that sample quarts of latex wall paint turn old newspapers into sculptural materials. So that was good.

I also did a little bit of distanced civic engagement. I learned of efforts to get an initiative (which would decriminalize some drugs and provide for better treatment) on the Oregon ballot in November…but one job that evaporates real quick under our current restrictions is signature collector. So they’re trying to collect signatures THE HARD WAY, one at a time, from people’s homes. Since i don’t have printer, i sent a query to my neighbors in the rainbow house, who printed it for me and returned it with a plate of mine, and i in turn sent it off with a dragon stamp. And i forwarded the appeal to friends, fragile mycelial democracy. It’s a tiny thing, but it’s a thing i can do to still feel like i’m participating in the world. As if civilian participation had a power we could wield. Perhaps if we act as if it’s true, that’s the only way it could.

For those keeping track, i’m dropping down to 3 days/week at work. It’s good to feel useful, but with the three hours of walking and a ten-hour work day, that’s a lot. I want to tend my garden.

Deemed essential by their parents, close friends, and sheltering-in-place gardeners across Portland, Hoyt commutes on foot across the quietened city to their work at a garden center. Somehow they started writing a newsletter for the aforementioned parents and friends about that commute.

*Chris points out that this is a job for the reference desk librarians, who are still working remotely even though the Multnomah County Library is closed. If you’ve never benefited from the good work of a reference librarian, this might be a good time to give them something to research!

The author prefers only to capitalize the pronoun I when it occurs at the beginning of a sentence. Their explanation is as follows: “The first-person singular pronoun is no more important than we or she, they or ze, and merits no greater typographical weight.”