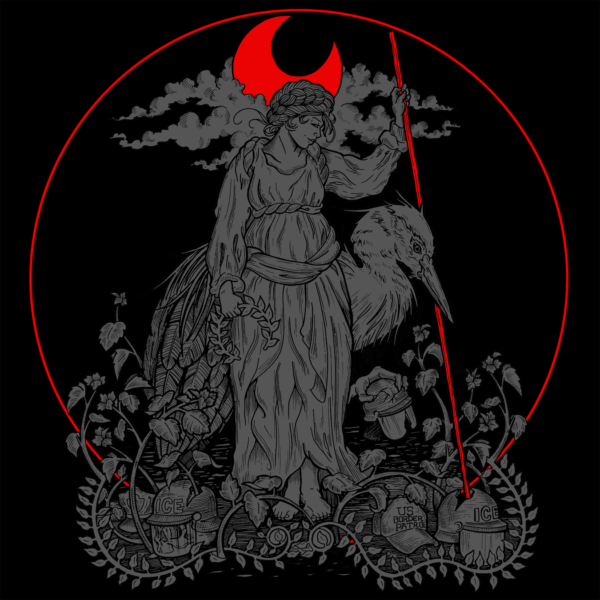 The heroes in this passage:

Fabulous Addison lifts up their iPhone and snaps a selfie.

Upload to Instagram, instantly liked by their genderqueer fan base.

Addison puts down the cell phone, puts on a face mask, ready.

Grabbing their stencils and spray paint, concrete walls are their canvas.

Jonathan lights up a molotov cocktail, hurling it into

The fray. Fire-bombing officers shielded in riot gear, armed with

Battle and glory and vengeance and justice and madness and chaos.

Hardworking Olivar making a living and plugging along.

Keeping his head down, avoiding the watchful eye of the state.

This is a typical parking lot somewhere in New England at dusk.

Gone are the hemlocks and murmuring pines which stood on this land,

Bearded with moss and in garments green, long since leveled to build up

You guessed it. They paved paradise, put up a parking lot, right here.

Covers the sky from horizon to horizon, but stars cannot outshine

The Calm After the Storm

Under the glow of a rather familiar corporate logo,

Two of our heroes are sitting and sharing a bottle of something.

Jonathan lights up a cigarette, offers another to his friend.

Addison graciously declines and rummages through their backpack.

Spray paint cans rattle together as Addison searches for something,

Finding a package of jerky and several candy bar minis.

After a long day fighting together as radical comrades,

These small pleasures are cherished and soon they are pleasantly basking,

Feeling the warmth of a sugar high, tipsy from alcohol, happy.

Jonathan smiles at his new found accomplice, a talented artist

Who has finished a takeover, covering billboard displays

With their own images: rioting robots hurling firebombs.

Addison smiles in return at the prize-fighter, Jonathan, warmly.

They are recalling how, earlier, Jonathan fought to the forefront,

Thousands of dollars in damages, chipping at profit margins.

Fleeing together through chaotic rioting, hopping a train and

Hiding from police and private security, these two are now

Free and indebted forever to each other. Comrades at arms.

Partnerships such as these, vision and bravery, grow to be legends.

Working in bold solidarity, unity, these two can topple

Giants much bigger than themselves if they are given the chance.

Darkness brings with it the cold, and our heroes are ready to return

Home to their dwellings, respectively. Addison shoulders their backpack.

Parting ways, for now, eager to see one another again soon.

Jonathan languishes briefly while walking toward his squat.

Affections for this fabulous street artist well up inside.

“They are a they,” he repeats to himself as he walks home, blissful.

Crossing the street at the corner without even looking for traffic.

Olivar slams on his brakes, this pendejo just comes out of nowhere.

Innocent bystanders who were near all the chaotic madness

Seem to recall that the riots were sparked when Securitas workers

Shot at an unarmed citizen who was in some sort of crisis.

Witnesses say that the man was crying and screaming and shouting.

He didn’t have any weapons at all and didn’t attack, either.

“It wasn’t ok, killing that poor man. But surely violence

Isn’t the answer. It’s horrifying how many people around here

Acted so brutally. Look at this place, how it looks like a war zone!”

Someone else commented: “Whatever happened to peaceful protest?”

This piece is from the Imaginations issue of Perspectives (n.31). The whole issue is available from Powell’s Books here! and AK Press here!

Kaz DeWolfe is a genderqueer, mad, neurodivergent, disabled, broke single parent. They are a mad pride and neurodiversity advocate, activist, writer, and artist. Kaz lives in Brattleboro, Vermont with their kid and pet hamster.